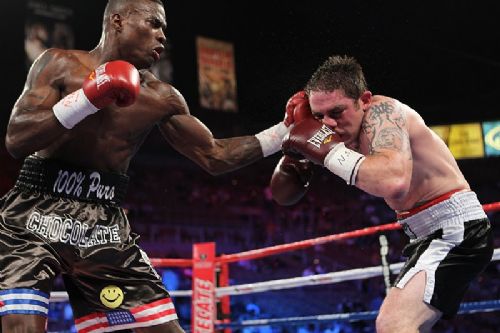 Exciting middleweight titlist Peter Quillin has booked his next outing with a tough assignment against Gabriel Rosado penciled in for October 26th. The fight will be the official co-feature to Bernard Hopkins IBF light-heavyweight title fight with Karo Murat at the Boardwalk Hall in Atlantic City, New Jersey live on Showtime. The undefeated Quillin (29(21)-0) is coming off an impressive win over Fernando Guerrero, with the New York based-banger knocking down the Dominican 4 times en-route to an impressive 7th round TKO. Previous to that he was seen destroying the highly rated Hassan N’Dam N’Jikam, knocking down the African 6 times to cement his place amongst the middleweight elite and continue his trend of exciting fights.

Rosado (21(13)-6) lost his last bout on points to J’Leon Love, although luckily enough it was declared a NC after Love failed a doping test. Previous to that he was seen getting outgunned on HBO by current 160 lb superstar Gennady Golovkin back in January. We told you here months ago, that the fan friendly American Quillin was hoping to take his WBO title across to the UK to face solid and dangerous operator Martin Murray, although the Brits promoter bizarrely turned down the fight leaving Quillin and Golden Boy to book Rosado in at the last minute.