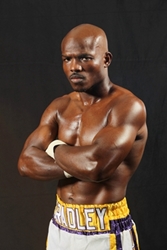 Bradley – Why He Passed on Pacquiao, Picked Marquez WBO welterweight champion Timothy Bradley explains why he took a pass on a Manny Pacquiao rematch and selected former four division world champion Juan Manuel Marquez as his next opponent. The fight is scheduled to take place on October 12th at the Thomas & Mack Center in Las Vegas. HBO Pay-Per-View will carry the fight.

Question: Bradley – Why did you choose Marquez as your next opponent instead of a rematch with Pacquiao?

Bradley: I have always been more interested in looking for new challenges than in doing what has been expected.  Though I was offered a rematch with Manny Pacquiao in Macau, the opportunity to fight another legend of my era — Juan Manuel Márquez — had far more appeal to me for several reasons.

Márquez is a boxing legend and a Méxican icon. He is coming off a career-best victory over his professional nemesis Manny Pacquiao. I am coming off my two career-best victories — over Pacquiao and Ruslan Provodnikov. It just made sense for me to fight Márquez next. Bradley vs. Márquez — a battle between the only two fighters to have beaten Manny Pacquiao in the past seven years. It got me excited as a fighter and as a fan. It was a no-brainer for me.

Challenges are what I am all about. They invigorate me. And the chance to fight Márquez in front of his legion of loyal Hispanic fans?  Heck, I’m riding that wave. I live for a fight like this. He wants to make history by being the first Méxican fighter to win five world titles in five different weight divisions. Chávez, Morales and Barrera never did that. I know he wants to make history. But I want to make my own history and beating Márquez and denying him of his ultimate goal, in the boxing capital of the world, will do just that.

If Manny Pacquiao can beat Brandon Rios in November than maybe we can have our rematch after that fight.  But timing is everything and the time for Bradley vs. Márquez is NOW.  I choose the battles I want to fight and I want to fight Márquez. This is my time.