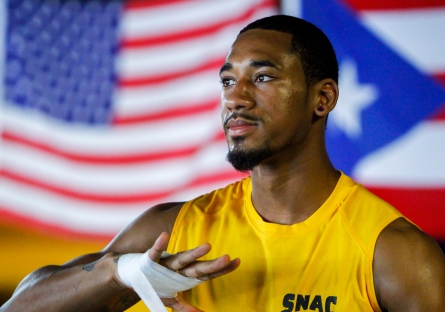 While he’s the WBO junior middleweight champion, Demetrius “Boo Boo” Andrade aspires to a much bigger goal. He hopes to take on one of boxing’s all-time greats in Floyd Mayweather Jr., who this past weekend pocketed $32 million in beating Marcos Maidana. Andrade is in Jacksonville working with his massage therapist while he continues training for a title defense June 14 on HBO.  John Sudbrink/The Daily News –

Six years after returning from the Olympics without a medal following a disputed quarterfinal loss in Beijing, Demetrius “Boo Boo” Andrade is 20-0 as a professional and the World Boxing Organization junior middleweight champion.

But if the 26-year-old southpaw has his way, you ain’t seen nothing yet.

While his first title defense against WBO top-rated mandatory challenger Brian “The Lion” Rose (25-1, 7KOs) is scheduled for June 14 at the Barclays Center in Brooklyn, N.Y., on HBO, Andrade has bigger aspirations – much bigger aspirations.

His eyes, not to mention his “mind, body and soul,” are on the prize, which is none other than to face one of the sports’ all-time greats, 37-year-old Floyd Mayweather Jr., the nine-time, five-division world champion who beat Marcos Maidana on Saturday night in a majority decision for the 46th victory in his career that is without a blemish.

As soon as the fight was finished there were those calling for a rematch, but if Andrade has his way he’ll be next to step into the ring against Mayweather, who earned $32 million for his latest victory.

“I’m just ready to get in there, whup the lion (Rose) and tame him; he’s going to be my little cub and I’m going for the big shot,” Andrade said. “I do want Mayweather. There’s nobody out there for me other than him.”

First, however, Andrade, must beat Rose. To do that, Andrade said he’s working hard in training camp, which for the past week has been in Jacksonville, where he came to see his massage therapist, Lori-Ann Gallant-Heilboran, whom he first worked with during the 2008 Olympics. Along with working with her, Andrade has been working out both in town as well as aboard Camp Lejeune.

“We’re just bracing ourselves for whatever we have to do on fight night. That brought us up here,” Andrade said during an interview at The Daily News office. “We’re doing everything we need to do.”

Andrade said Martirosyan “kind of ran the whole night,” and some observers questioned the judge who scored the bout for Martirosyan. Nonetheless, Andrade won the title and now faces Rose as the co-main event at the 18,103-seat Barclays Center.

“Winning the title is just the beginning, the first part of being a superstar or being one of the greats,” Andrade said. “Anybody can win on any given night a title. It’s about what you’re going to do afterwards, if you can hold onto it for longevity, and that’s what I plan on doing. We’re working extremely hard and smarter and doing everything we need to do to overcome whatever comes our way.”

Starting with Rose, a bout Andrade predicted won’t go the distance. Then, he hopes and dreams, it’s on to Mayweather.

“When I win June 14th…, I would call Mayweather out. But I can’t rely on that guy. He pretty much is self-made and picks his opponent and is going to go whatever’s going to generate the most income. Can I blame him for that? No. He’s already did everything in the sport he needed to do. But if he wants to go against somebody that’s undefeated, going to give him an arduous time in that ring, that’s me,” Andrade said.

“I’m ready if he wants to do it. If not, all I can do, and all I told my supporters and my believers and myself, is I will carry the torch when his time is up.”

Mayweather has three fights left on a lucrative six-fight contract, which leaves him room to fight Andrade – if he decides to. Does Andrade believe that one night he’ll slip through the ropes to take on Mayweather?

“It’s hard to tell. Can it happen? Maybe. It’s 50-50 chance. It’s up in the air,” he said. “I’m undefeated with a belt. There’s nobody else in the 154 weight class that’s undefeated, that’s long, that’s slick and that will give him a difficult time, and people want to see it. I know I haven’t been fighting a long time like him. … But now that I’m the WBO (champ) the light’s starting to come toward my way I can be able to call out top guys now. It’s up to them to take the fight.”

And make no mistake about it, if he beats Rose next month, Andrade will stand up on HBO and proclaim he wants Mayweather.

“I will be shouting him out,” he said. “I don’t see anybody else in the 154 division other than me to get in the ring with him, but there are fighters at 147 he can fight also. It’s on him. He can do whatever he wants to do. My job is to keep on winning, give the fans what they want so they can keep shouting my name. If it doesn’t happen, I’m going to be the one that carries that torch and gives excitement and be the next greatness of boxing.”