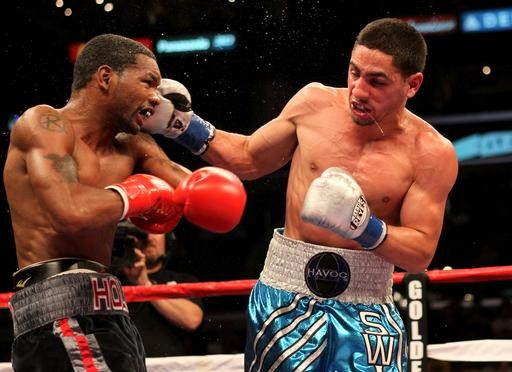 Danny Garcia won the vacant NABO Jr. Welterweight belt on Saturday night in Los Angeles, on a split decision over Kendall Holt. Fighting on the HBO PPV undercard supporting Hopkins vs. Dawson, it was finally put-up or shut up time.

The pre-fight talk was nasty, but most of it was between Holt (27-5 15 KOs) and Garcia’s father Angel. The Paterson, N.J. native was sick and tired of the senior Garcia saying that Holt was talking “monkey s–t” when he dismissed his son’s record.

Danny Garcia remains undefeated with a record of 22-0 14 KOs) but prior to the bout, Kendall Holt ridiculed his knockouts, asking, “Who has he knocked out.?”

“Really, who are they? Will we remember anyone them in years to come?”

The final press conference during fight week saw Angel Garcia spewing expletives at the microphone in support of his son. He heckled Holt when it was his time to speak but refused to come forward and face him when challenged.

Holt noted that he wasn’t boxing his opponent’s father and then went on to take issue with Danny’s resume.

Fast forward to fight night and Danny Garcia clearly backed up his Pop’s boasts and predictions. He kept up steady pressure, timing his punches on the counter.

They added up to the point where Garcia’s prolific right hand had almost closed Kendall Holt’s left eye. At one point in the eighth round, after a break to deal with a complaint of a hit to the back of the head, Garcia caught Holt unaware after time was back in, despite Kendall Holt trying to touch gloves.

A mini Mayweather vs. Ortiz moment.

Holt’s head snapped back and it was then you knew that Garcia didn’t talk much but he had a plan and went about executing it efficiently and relentlessly.

By the twelfth and final round Holt was gassed, trying to keep hope alive as Garcia kept up the pressure when necessary. The judges scored it 117-111, 117-111 for Danny Garcia and 115-113 in favor of Kendall Holt.

Holt was humble in defeat telling media, “He outhustled me all night. I was looking for the knockout too much. I’ve got to go back to the drawing board.” It’s clear he’s right.