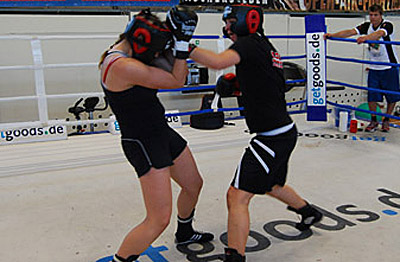 The contestants of the upcoming getgoods.de-Fight Night have completed the sparring phase this week. “We have never completed so many rounds,” said female world champion Christina Hammer about the tough training period prior to her title defense. On Friday she will defend her WBO and the WBF world title against the American Living Vashon at the Brandenburg-Halle in Frankfurt/Oder.

In the training gym in Magdeburg, also the men were sweating heavily. Robin Krasniqi had several sparring rounds against WBO champion Robert Stieglitz in the ring and got himself checked by the world champion. In Frankfurt/Oder the light heavyweight contestant wants to picks up his first title. Against the Frenchman Abdelhakim Derghal he aims for the WBO European Championship and to position himself on the top spots in the world rankings in his weight division.

For heavyweight Francesco Pianeta Frankfurt/Oder will mark a successful comeback. The talented SES fighter Dominic Boesel, who will be featured in a four rounder against the Tunisian Rabie Ben Lakhbhar Inoubli, has also invested a lot into the training effort of his boxing career similar to all the champions in the boxing stable.

“I’m glad that there has been, despite the hard sparring and the long preparation phase, no injuries or other problems. Now, all of our fighters are in top form and ready on technically and tactically basis. The athletes are ready and on fire,” said head coach Dirk Dzemski on the completion of the intensive period of preparation.

Triple world champion Susi Kentikian has concentrated in the sparring phase with her trainer Magomed Schaburow in Hamburg for her title defense against the Thai world champion Teeraporn Pannimit. “All the fighters have difficult tasks ahead. In Frankfurt/Oder it’s all about the sport,” said SES promoter Ulf Steinforth. The athletes have packed their bags and will move into their hotels on Monday for the upcoming fight week in Frankfurt/Oder.