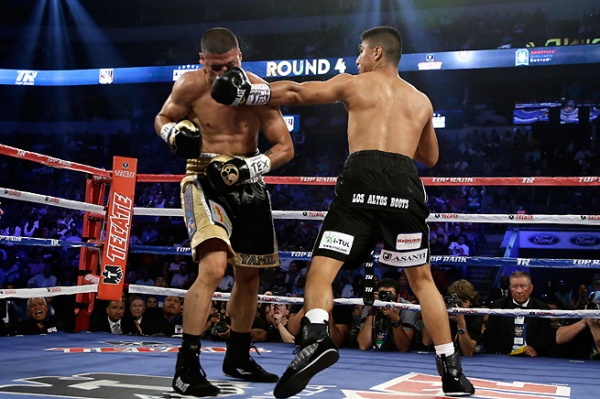 DALLAS (AP) Mikey Garcia quickly got over the disappointment of losing his crown.

Garcia (32-0) weighed in at 128 pounds Friday, two over the featherweight limit. Lopez weighed in at 125 1/2. Even though he tried to shed a couple pounds before the weigh-in, Garcia knew it was likely he was going to have to forfeit his title.

“The disappointment was there because I lost my title,” Garcia said. “I was crying a little bit because I knew I wasn’t the champion. But everybody got a chance to see I’m a good fighter. This was a satisfying victory.”

Garcia put Lopez on the ground with a strong left-handed blow 1:34 into the fourth round for his 27th career knockout. The 25-year-old Californian connected on 53 punches – 40 of them jabs. Lopez connected on only 23 of 153 attempted punches.

Lopez (33-3) would have regained the title with a win.

“It’s not that I wanted to make a statement,” Garcia said. “We just had a really good night.”

Garcia won the title from Orlando Salido in a unanimous decision in New York on Jan. 19. The title reign, however, was short-lived after Garcia didn’t make weight.

The only two losses of Lopez’s career were to Salido. The first one cost him the WBO belt, and the second led to a one-year suspension by Puerto Rican boxing officials when he accused the referee who stopped the fight of betting on the match.

Lopez had won twice since his one-year ban ended, beating Aldimar Silva Santos in February and knocking out Eugenio Lopez in an undercard bout in Mexico City in April.

Garcia’s plan was to attack early with the jab and step back from Lopez before attacking. With a majority of fans chanting his first name early, Garcia came out and landed a series of jabs in the first round.

In the second round, Garcia knocked Lopez down with a right cross. Lopez quickly rose to his feet and completed the round. Garcia finished off the 29-year-old Lopez two rounds later.

“I was able to land my jab and stand pretty comfortable,” Garcia said. “When I knocked him down, that gave me confidence that I could put him out early.”

Lopez appeared wobbly early in the fourth after Garcia landed a combination of punches. Garcia finished him off with a powerful left hook. Lopez slowly got up and referee Rafael Ramos quickly called the match.

On the undercard, Terence Crawford (21-0) won the vacant NABO lightweight title, stopping Alejandro Sanabria (34-2-1) in the sixth round. Crawford dropped Sanabria with a left hook 17 seconds into the round.

Sanabria got up, but the referee called the fight to give Crawford his 16th knockout victory.