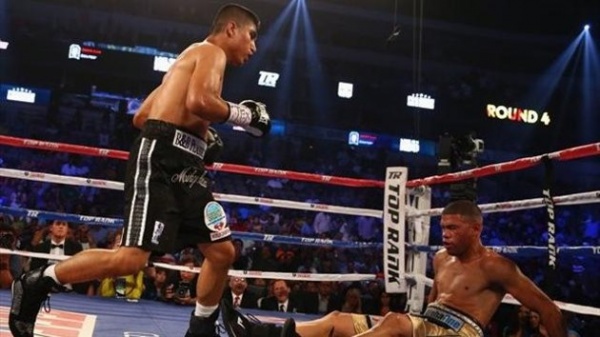 Garcia stops Lopez in fourth round Mikey Garcia stopped Juan Manuel Lopez in the fourth round of their WBO featherweight bout but it was to no avail as Garcia didn’t make weight.

Lopez weighed in at 125.5 pounds (57 kg). Even though he tried to shed a couple pounds before the weigh-in, Garcia knew it was likely he was going to have to forfeit his title.

“The disappointment was there because I lost my title,” Garcia said.

“I was crying a little bit because I knew I wasn’t the champion. But everybody got a chance to see I’m a good fighter. This was a satisfying victory.”

Garcia put Lopez on the ground with a strong left-handed blow 1:34 into the fourth round for his 27th career knockout.

Lopez (33-3) would have regained the title with a win.

Garcia won the title from Orlando Salido on a unanimous decision in New York on January 19.

The title reign, however, was short-lived after Garcia didn’t make weight.