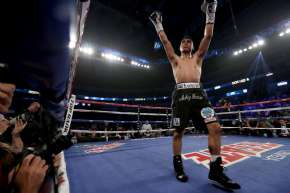 One day after losing his WBO Featherweight belt on the scales after missing weight by two pounds, 25-year old Mikey Garcia (32-0, 27 KO) of Oxnard, California, laid four rounds of beating on 29-year old former 122 and 126 lb. titlist Juan Manuel Lopez (33-3, 30 KO) of Caguas, Puerto Rico, for what turned out to be an easy win on Saturday night at the American Airlines Center in Dallas, Texas.  The referee was Rafael Ramos.

The drama of the fight came before the opening bell at Friday’s weigh-in.  Lopez, who had moved to 130 lbs. before agreeing to drop back down for this title opportunity, made weight at 125 ¼ while Garcia came in at 128.  A cash settlement reported in the six figures allowed the fight to go on with the title on the line only for Lopez.

The first was largely a feeling out round, Garcia’s best work coming off his stiff left jab.  Lopez, a southpaw, landed a couple of straight lefts to lay out his intentions.  A minute into the second, Lopez was tagged with a hard left hook and then right hand, his legs saying he’d felt the punches.  After taking a jab down the middle, Lopez mugged at Garcia but had no leather to show for it.  With just less than a minute left in the first, a right hand put Lopez down on the seat of his trunks.

Lopez rose quickly and nodded he could go on, finishing the round as Garcia chose not to press the action down the stretch.  A mouse was beginning to form under the left eye of Lopez.

Waiting on Lopez to come forward, Garcia tagged him with a nearly flush left hook in the first minute of the third, the two men quickly falling into a short clinch.  Lopez was blasted back with a right hand at mid-ring halfway through the round but kept his feet.

It didn’t work out that way in round four.  A right hand rocked him early in the round, an early warning that the end was near.  Under fire after a right caught him coming in, Lopez didn’t take the next big right from Garcia but was wide open for a left hook.  The shot smashed into his face and sent him flat backwards, legs straights and arms flat out as if crucified.

Showing, once again, the heart beneath his technical flaws, Lopez beat the count but was in no shape to go on.  Ramos stopped the fight 1:35 of round four.

Asked in the post-fight interview about the loss of his title on the scales, Garcia was blunt.  “It definitely does suck.”  Garcia explained he’d done what he could to make weight, and had been sick shortly before the fight that impacted his weight plans.  “I think I can still fight at the Featherweight limit.”

Whether that turns out to be the case or not, Garcia also stated a move to 130 lbs. is an option and may be the more realistic option going forward.  The class of the division, Argenis Mendez and Takashi Uchiyama, would both be solid challenges for Garcia if the fights could be made.

For Lopez, the harsh reality of the fight game should be setting in.  He looked slow, sluggish, and defenseless for most of the night.  After multiple wars, punctuated by two stoppage losses to Orlando Salido, Lopez looks spent.  His career may continue, but it doesn’t look like that is anything to cheer about.

The televised opener put a Lightweight on display who may well be worth cheering about for a while to come.

After a workmanlike first two rounds, Crawford opened up in round three and rocked Sanabria with a right hand and follow-up volley.  Sanabria absorbed the blows and fired back, keeping Crawford honest.  Sanabria closed the round landing a muffled right hand as Crawford came forward with a right of his own.

Crawford, mixing up his attack to the head and body while successfully defending against the incoming, buzzed Sanabria again in both rounds four and five.  In round six, he lowered the boom on an exhausted Sanabria.  Leaving the corner at the bell, Crawford quickly detonated a lead left hook to flush to the jaw and Sanabria went towards the deck in an awkward somersault.  Sanabria beat the count but was shaky and referee Cole opted to halt the action at :17 of round six.

Crawford entered the fight rated #15 by the WBA and will hope to begin to inch towards legitimate title contention.

The contest was televised in the U.S. on HBO as part of its “Boxing After Dark” series, promoted by Top Rank.