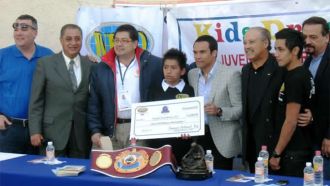 World Boxing Organization lightweight super champion Juan Manuel Marquez has joined WBO president Francisco “Paco” Valcarcel in the “Kids Drug Free” program of the WBO and made a donation to the children of Hogares Providencia of Father Chinchachoma in Coyoacan, Mexico City..

Valcarcel said “We are very happy to be in Mexico with our great Super Champion helping the future of this country.” The WBO president said “We have been helping the children with our WBO “Kids Drug Free” program in over 25 countries.

Hogares Providencia of Father Chinchachoma is a non-profit organization which helps homeless children by giving them a place to live and providing them with an education so they could become better citizens.