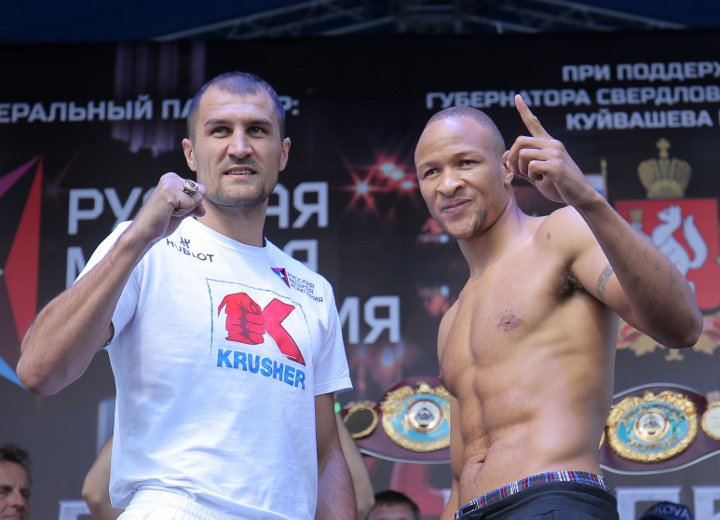 Duva: Chilemba a ‘Real’ Foe For Kovalev; Prepares Him For Ward His promoter suspects Sergey Kovalev is in for a more difficult fight Monday than the odds indicate.

Numerous Internet sports books list Isaac Chilemba as a 16-1 underdog against Russia’s Kovalev, but Kathy Duva envisions Kovalev having more trouble than that when they fight for Kovalev’s IBF, WBA and WBO light heavyweight titles at DIVS Sports Palace in Ekaterinburg, Russia.

South Africa’s Chilemba is a smart, sound boxer, hasn’t been knocked out during his 10½-year professional career and is well aware that this is an opportunity to completely change his life.

“If it weren’t for what I thought was a bad decision in Canada, Isaac would be fighting [Adonis] Stevenson for the [WBC] title,” said Duva, whose New Jersey-based Main Events promotes Kovalev and Chilemba.

“So he is a legitimate contender. He is someone who is gonna give Sergey a real fight, give him a real challenge, gonna give him the opportunity to have to work hard to beat a boxer, someone who is not just gonna stand in front of him. These are all things he’s gonna need to prepare for the [Andre] Ward fight.”

Duva referred to Chilemba’s majority decision defeat in his last fight to Montreal’s Eleider Alvarez. The Colombian-born Alvarez (19-0, 10 KOs) won that 12-round WBC championship elimination match on two scorecards (118-110, 115-113) and it was a draw on the third card (114-114) on November 28 in Quebec City, Canada.

If Kovalev (29-0-1, 26 KOs) beats Chilemba (24-3-2, 10 KOs) and Ward (29-0, 15 KOs), also heavily favored, overcomes Colombia’s Alexander Brand (25-1, 19 KOs) on August 6 in Oakland, California, Kovalev and Ward will fight November 19 at T-Mobile Arena in Las Vegas (HBO Pay-Per-View). Even with so much at stake, Kovalev didn’t want would amount to a tune-up fight Monday night, especially since he hasn’t really been challenged since his first technical knockout victory over Jean Pascal in March 2015.

“Sergey made it very clear from the start, ‘When I go fight in Russia, I don’t want to go there and have a fight with someone who isn’t highly rated and who is not viewed as a real opponent,’ ” Duva said. “And that was really how he looked at it. Because Isaac unfortunately didn’t get that opportunity with Stevenson, he was willing to go to Russia and he was willing to do this. To his credit, he jumped at it. So we were able to make a very good fight for Sergey, very easily. That’s what he wants. He didn’t want somebody who was just gonna fall down if he blew on him.”

HBO will televise the Kovalev-Chilemba bout via tape delay at 10:15 p.m. ET/PT on Monday night.