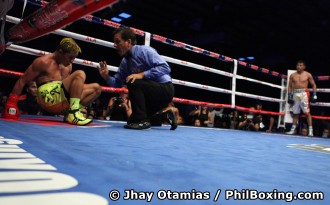 Showing amazing resiliency after being knocked down in the dying seconds of the opening round by a vicious left hook from previously unbeaten Prince Albert Pagara, Mexico’s Cesar Juarez came charging back and eventually crushed the world title hopeful with a series of bludgeoning punches that sent the Filipino crashing to the canvas early in round eight where he lay prostrate on all fours for several minutes before being stretchered out and taken by ambulance to the Stanford Medical Center.

Dr. Ed de la Vega who was part of the three-man team which worked the corner of Prince Albert that included trainer Edmund Villamor and his brother Edito, accompanied Prince Albert to the hospital and informed The Standard Pagara will undergo a CTScan but was alert and conversing with him.

It was obvious that Juarez who displayed the same kind of remarkable comeback when he lost in his bid for the vacant WBO junior featherweight title to Nonito “The Filipino Flash” Donaire in Puerto Rico last December where Donaire banked on two knockdowns in the 4th round to win by a somewhat lopsided decision which didn’t reflect the closeness or the brutality of the championship rounds, was in his elements against Prince Albert, who he claimed in a pre-fight press conference didn’t have the experience and was not in the same class to face him. Juarez regularly pushed Pagara to the ropes and bombarded him with thundering body shots that soon began to sap the energy out of the young Filipino in a fight that was regarded as the ultimate test of whether he was ready for a possible world title shot.

Juarez provided the answer in emphatic fashion as he began to dominate the fight after being stunned by the initial first round knockdown.

In the seventh round Juarez backed Prince Albert against the ropes and unleashed a two-fisted assault that had Pagara in trouble. However, Pagara used his footwork to get back into the center of the ring but Juarez pinned him down again and often connected with solid blows to the head. Pagara was on wobbly legs as he headed to the corner at the bell. Smiling in the corner before the eighth, Pagara rose slowly. Boxing Scene noted that Pagara’s corner seemed to be helping him get his balance and he sort of stumbled out of the corner without so much as an eye on Juarez. Pagara walked right into a flush four punch combination and was deposited right back in the corner he’d just left. The referee jumped in to halt the action immediately. The official time of the stoppage was :15 seconds of round eight.

Juarez called out Donaire and asked for a rematch which Donaire readily agreed to but said his promoters would have to work it out.

Donaire who was on the ABS-CBN TV panel at the San Mateo Events Center said he thought “more than anything it was the exhaustion” that led to the first KO loss in Pagara’s while there were those who claimed that Prince Albert was too confident and bordered on being cocky.

The end was unexpected as it was sudden and stunned predominantly Filipino crowd which was still celebrating after WBO junior welterweight world No.1 ranked Jason “El Nino” Pagara, the elder brother of Prince Albert scored an explosive 3rd round knockout over Abraham “ The Swift” Alvarez who was sent crashing to the canvas with a thundering body shot followed by a picture-perfect right hook to end the scheduled eight round bout at :55 seconds of round three.

With the win Jason improved to 39-2 with 24 knockouts while the clearly over-matched Alvarez dropped to 21-10-1 with 10 knockouts.