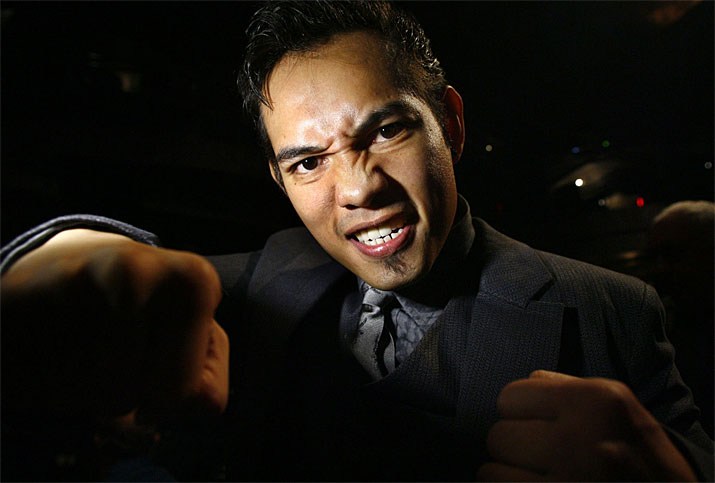 WBC/WBO bantamweight world champion Nonito Donaire (26-1, 18 KOs) is set to defend his belts against unbeaten two-division champion Omar Narvaez (35-0-2, 19 KOs) on October 22 at The Theatre at Madison Square Garden. At a recent press conference, the Filipino American fighter approached the mic with an attempt at Robert DiNiro’s role in “Taxi Driver” saying, “You talkin’ to me? You talkin’ to me?” Donaire went on to say that to fight at Madison Square Garden is an honor. He’s looking forward to showcasing his boxing skills to the Filipino, Latino, and local community for his first appearance in NY. Donaire also announced that he’ll be outfitted in pink for the October 22nd fight in support of National Breast Cancer Awareness Month.

While, Nonito Donaire is ranked in most top fives pound for pound, he is looking to cross over from being a favorite among the hard core boxing fan base to being a fighter everyone knows.

His biggest breakout performance came in July of 2007 when he knocked out undefeated flyweight champion Vic Darchinyan in round five winning the IBF championship. Donaire said, “The Darchinyan KO started the Donaire buzz. The fans questioned if I was a fluke or a flash in the pan. Since then I continued to prove that I’m here to stay.”

Fighting at MSG and having the bout broadcast live on HBO, Donaire is hoping to build on this momentum. “I’m hoping people from Jersey City, fans from the NY area, the Filipino and Latino fans, and all boxing fans can come out to bring excitement to the Garden on October 22nd.” Donaire understands how important it is to entertain the fans at MSG and at home watching on HBO. “It’s a great opportunity to fight on TV especially HBO.” When asked why he wasn’t part of the Bantamweight Tournament on Showtime he said, “There was an opportunity to fight the best at that time, in Fernando Montiel. Everything has been great after that. I don’t regret anything.”

The challenger, WBO Super Flyweight Champion, Omar Narvaez, is moving up in weight with intentions of taking the WBC and WBO bantamweight titles from Donaire. Donaire said, “He’s an experienced, slick fighter that can pose a threat but I’m going to train hard and I know when I’m at my best no one can stop me.” In Donaire’s last ten fights he has nine ending by early stoppage or knockout. Donaire said “If I see the knockout I’ll take it but I’m ready to go 24 rounds if I have to.”

For the past four fights Donaire has been working with Victor Conte, the founder and president of BALCO, supplier of the banned performance-enhancing substance that was allegedly used by MLB players Barry Bonds and Jason Giambi. Conte is now running Scientific Nutrition for Advanced Conditioning and has recently been working with undefeated Super Six Finalist Andre Ward and IBF Welterweight Champ Andre Berto.

Donaire couldn’t be happier working with Conte. “It’s been great working with Victor, he’s a sweetheart, he’s actually like a father to me. I’ve learned a lot in terms of recovery and bringing out the best of me physically.”

Conte said “I’m relatively new in the game of boxing and what I learned in a short period of time is whether you win or lose the fight, it has to do with the talents of the boxer and the head trainer and if they get it right then the rest of the team gets to have the opportunity to contribute.” Conte went on to say “I’ve very pleased to be working with Nonito, he’s a very gifted guy not only in terms of his boxing skills but as a person. I have tremendous confidence that he’ll be in great shape.” Conte believes that Robert Garcia who will also train Antonio Margarito and Mikey Garcia for their upcoming bouts, and said “[Garcia] will put together a great game plan for Nonito and he’ll put on a great performance on October 22nd.”

If everything goes as planned Donaire will be saying, “You talkin’ to me?” after defending his title against Argentina’s Omar Narvaez.

Narvaez was not in attendance and was not available for comment.

Undefeated featherweight Mikey Garcia is on the undercard with no opponent scheduled at this time.