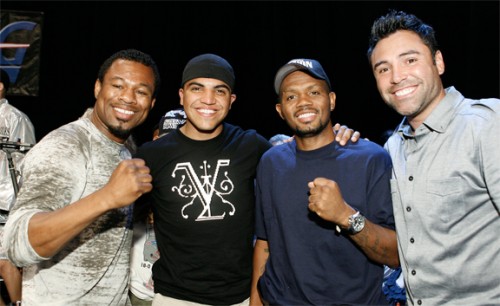 Longtime boxing manager Rolando Arellano has always had a reputation of being an outspoken individual in the sport. From Fernando Vargas to Victor Ortiz, Arellano is never one to mince words and has always stuck up for his fighters. So when he contacted Fightnews.com late Thursday afternoon, Arellano vented his frustrations about last Saturday’s night outcome between Ortiz and now world title belt holder Floyd Mayweather.

The end of the fourth round between the two fighters at the MGM Grand in Las Vegas has been the subject of water cooler talk between diehard and casual boxing fans. The media has spun the actions of both fighters and referee Joe Cortez in every direction, even speculating on the future of Victor Ortiz and the assumption that the only fight for Mayweather will be against Manny Pacquiao.

Arellano candidly spoke on everything from Joe Cortez to the forearms that Mayweather used during the fight. Although he could not defend Ortiz’s intentional head butt on Mayweather before the bizarre ending of the fight, Arellano was clear about what actions Ortiz will take.

“We can not petition the WBC for a rematch because they love Floyd. We can not go to the (Nevada State Athletic) Commission because they (Keith Kizer) ruled that there was no foul committed by Floyd or that Cortez did anything wrong.”

Although Arellano sticking up for Ortiz is admirable, asking for rematch with Mayweather will be a hard sell on the media and especially for fight fans, whom have long clamored for a showdown between Mayweather and Pacquiao.

Not to mention fight fans are probably not going to shell out money to buy a proposed second fight between Ortiz and Mayweather. Also, the media will point out that Mayweather was making the necessary adjustments to land repeated right hands to the head of Ortiz, especially in the third and fourth rounds.
Arellano disagrees.

“Victor is a young guy and it takes him a while to get going. He was starting to get to Floyd in the fourth round. I’m just sick and disgusted about Floyd and the actions that he took against Victor.”

Although Mayweather received criticisms and condemnations on his character by Arellano, the outspoken manager did not forget about the actions of Joe Cortez, or in his opinion, the lack thereof.

“Joe Cortez should never referee another meaningful fight. He didn’t have any control in there. He should just retire.”

Which makes today’s teleconference featuring Ortiz, Arellano, and Oscar De La Hoya somewhat appealing. It should come as no surprise that all three men will speak about a rematch. For the sake of the media and fight fans, a rematch between Ortiz and Andre Berto, whom the Ventura resident defeated in April, will be more appealing than asking for a rematch with Mayweather.

Stay tuned to Fightnews.com later today for quotes from all three from the teleconference.

Fightnews.com spoke to lightweight world title holder Brandon Rios on Friday night at the Commerce Casino in Commerce about the status of his next fight. There were the rumors that Rios would defend his belt on the undercard of the Pacquiao-Juan Manuel Marquez bout on November 12th. Then there was the talk of him headlining a December show in Southern California or in Las Vegas.

Ask if he had a preference, Rios said he would rather fight on the undercard of the Miguel Cotto-Antonio Margarito rematch on December 3rd at Madison Square Garden in New York City.

“I’d rather fight on December 3rd. It just makes sense because Tony and I are trained by Robert (Garcia). We would both fight on the same card and we train at the same gym.”

That gym is the Robert Garcia Boxing Academy in South Oxnard. Rios told Fightnews.com that he has already been in the gym training. Margarito is scheduled to officially start training camp at the gym on October 3rd.

It is known that linear world champion Sergio Martinez now makes his home along the beach in Oxnard. He trains at the World Crown Training Center inside the Powerhouse Gym, where Oxnard and Port Hueneme meet. The Training Center is co-operated by Cicilio Flores and Adam Flores.

However, few people realized that Martinez prepared for his October 1st showdown against Darren Barker by sparring against super middleweight contender Dyah Ali Davis. Also promoted by Lou DiBella, Davis left his home in South Florida and flew across the country to work out with one of the best fighters in the world today.

After running the hills above Ventura and sparring in the gym with Martinez, Davis was impressed with the Argentine-born fighter.

“I thought I was fast, but his speed is on a whole different level,” Davis told Fightnews.com recently. Davis also announced that he was fighting in an eight round bout on October 21st.

Fight fans in Southern California will have two compelling fight cards to choose from this Friday night.
At the Chumash Casino Resort in Santa Ynez, unbeaten Ajose Olusegun (29-0, 14 KO’s) and Ali Chebah (35-1, 28 KO’s) will battle it out in a 12 round elimination bout. The winner will be classified as the mandatory challenger to world title holder Erik Morales, who won last Saturday.

In the co-feature bout featuring hard-hitting lightweights, unbeaten Darley Perez will take on Oscar Meza in a scheduled 10 round bout.

Five non-televised undercard bouts are also scheduled to take place on the card, put together by Gary Shaw Productions and Lou DiBella Entertainment.
First fight on the card is scheduled for 5:30PM local time. For tickets and information, call 1-800-CHUMASH.

Three counties to the south, unbeaten lightweight Luis Ramos will take on David Rodela in a 10 round bout at the OC Hanger Event Center in Costa Mesa. The bout will headline a Golden Boy Promotions/ Roy Englebrecht Promotions “Solo Boxeo Tecate” card.

Also on the card will be unbeaten super featherweight Ronny Rios in a scheduled eight round bout against Ramesis Gil.

Ramos (19-0, 8 KO’s) and Rodela (15-4-3, 6 KO’s) were scheduled to fight on August 13th on the undercard of the Abner Mares-Joseph Agbeko bantamweight title bout. However, four days before the fight, Ramos was allegedly jumped by three suspects while running on a trail near the Santa Ana River. During the assault, Ramos suffered a minor concussion from the beating and was suffered minor cuts when one suspect allegedly used a box cutter.

Now that Ramos has been medically cleared, fight fans in attendance should expect an action-packed fight between two young fighters.