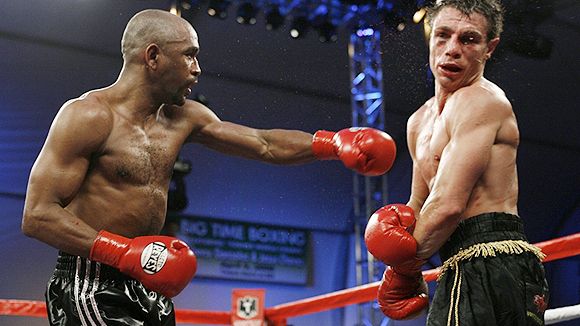 Former WBA lightweight champion Paulus “The Hitman” Moses (28-1, 19 KOs) weathered a strong challenge on Saturday from Brazilian champion Sidney Siqueira before emerging with a unanimous decision victory. The match took place in Moses’ hometown of Windhoek, Namibia, at the Windhoek Country Club Resort. Moses dominated the fight with his sharp jab, but Siqueira turned out to be as tough as he had been billed to be. The Brazilian champion responded with impressive combinations, but his efforts were only good enough to stay in contention, not win the match. The three scorers differed only on the degree of dominance by Moses. One judge saw the Namibian pitching a shutout, 100-90, while the remaining two judges thought Siqueira kept the fight closer at 98-92 and 96-94, respectively.

“Siqueira became a Brazilian champion for a reason,” Moses said after the fight. “He is a very good fighter, and he gave me his best for the full 10 rounds.

“Now it’s time for me to fight for a world championship again. I will do whatever is needed to achieve that goal.”

Moses’ promoter Don King was impressed by his fighter’s performance.

“This makes three wins in succession for my former lightweight titleholder Paulus Moses,” King said. “I’ve been working on another title shot for him, and this win on Saturday can only help his cause.”

Moses won his title when he traveled to Japan in 2008 and defeated Yusuke Kobori to capture the WBA lightweight crown. He lost the title in a showdown against then-WBA interim lightweight champion Miguel Acosta on May 29, 2010, by sixth-round knockout.