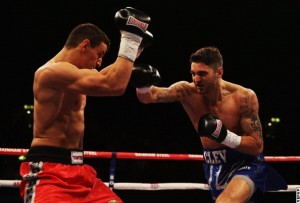 Nathan Cleverly produced his most disciplined performance on Saturday to retain his WBO world light-heavyweight title for the fifth time as he defeated mandatory challenger Robin Krasniqi by winning every round bar one on the cards of the three judges.

Krasniqi (12st 5lbs) was handed his first defeat in seven years, leaving his record to 39-3, 15KO. The challenger had spent all week attempting to rile Cleverly, giving him a skirt reading “Princess” at the press conference but Cleverly laughed off the insult and even wore the skirt to weigh in and the coolness was reflected in the ring.

A short right wobbled Krasniqi half way through the opener but he survived a follow up attack, it was a sign of things to come. It wouldn’t be the only moment that Cleverly hurt the challenger who was unbeaten in 38 fights prior to this weekend; a right slip-uppercut in round four, left hooks to the pit of Krasniqi’s body in the round six and a flurry at the end of round ten also made their mark on the Serbian born German.

Krasniqi refused to fold and sent a few of his own reminders, most notably in the middle rounds, but Cleverly stuck to his game plan and made relative easy work of an opponent many were tipping to cause the Welshman some trouble.

Krasniqi’s first mark was made in round three as a right hand landed flush but every time he enjoyed success, Cleverly raised his game to have the last and most telling say. Much had been made or Krasniqi’s uppercut that saw him rise through the WBO rankings via four straight knockout wins but it was absent on the whole as Cleverly rotated to his right to nullify Krasniqi’s greatest asset.

Throughout the bout Krasniqi was over-reliant on his right hand and it was something Cleverly had prepared for, opting to box at range and go to his right away from the shot. The 26-year-old Welshman was aided by a great jab that varied from a piston shooting straight down the pipe to a blinding flick from the hip. Whenever Krasniqi, also 26, caught up with Cleverly the Welshman would utilise his superior footwork to regain centre ring and start again.

Donned in the blue of Cardiff City who celebrated promotion to the Premiership earlier that day, Cleverly sustained a ruthlessly efficient output, producing on average 87 punches per round – the exact same rate he threw against Shawn Hawk in November.

It was a polished and mature performance from Cleverly who showed many of the attributes he’s been criticised for neglecting in the past and it demonstrated that he’s a level above mandatory challenges as he goes in search of a big fight.

With long term target and IBF champion Bernard Hopkins due to defend his title against former Clev victim Karo Murat in July, there are preliminary plans for Cleverly to feature on the undercard and against WBA champion Beibut Shumenov.