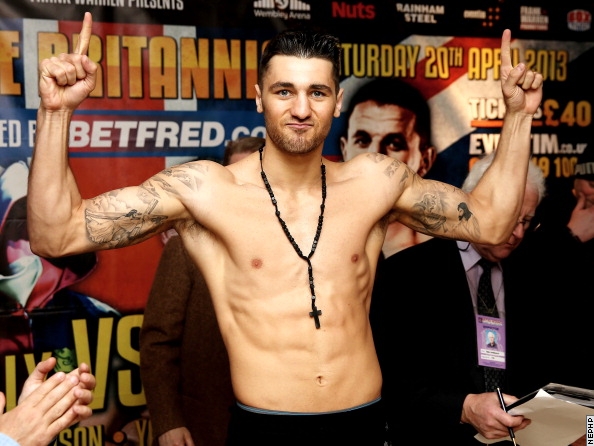 Cleverly Wants All of The Gold at Light Heavyweight Nathan Cleverly has declared 2013 as the year he will unify the light-heavyweight division after polishing away the ring-rust against outclassed Robin Krasniqi at Wembley Arena on Saturday night.

Cleverly defended his WBO title for the fifth time with a landslide points decision against the tough but limited mandatory challenger, winning every round on two scorecards and all but one on the third.

It was only his fifth appearance in nearly two and a half years, but the 26-year-old hopes it is the beginning of a busy and triumphant chapter of his career that will see him acquire two more belts.

First in the crosshairs is WBA champion Beibut Shumenov with victory in that contest setting up his dream showdown with IBF king Bernard Hopkins.

“This is the year to stay active and push for the big fights. It’s very important for me to get back in the ring as soon as possible,” the Welshman said.

“I need to stay active and keep the rust away and try to unify the light-heavyweight division. 2013 could be the year to do that.

“I want fights that test me and that’s the elite fights now – Hopkins and those guys.

“They’re technically brilliant and will tell me if I’m an elite level fighter or just a world champion. I’m looking forward to finding out.

“Fighting back in Wales is a possibility at the back end of 2013, but next will be a fight in America in July.”

The plan could yet be derailed by Juergen Braehmer, another mandatory challenger to the WBO belt, although unification fights take precedence over defences ordered by governing bodies.

With that in mind, promoter Frank Warren will be keen to nail down meetings with Shumenov and then Hopkins and hope that Cleverly’s belief that Braehmer is not genuinely interested proves correct.

A slight tinge of disappointment laced Cleverly’s words as he reflected on his performance against Krasniqi, although he could have done little more against the Kosovan.

“I’m still learning, but I’m winning and winning quite well now,” said Cleverly, who extended his unbeaten record to 26 fights.

“It’s been a good few months since I was in the ring, so maybe that was a factor.”