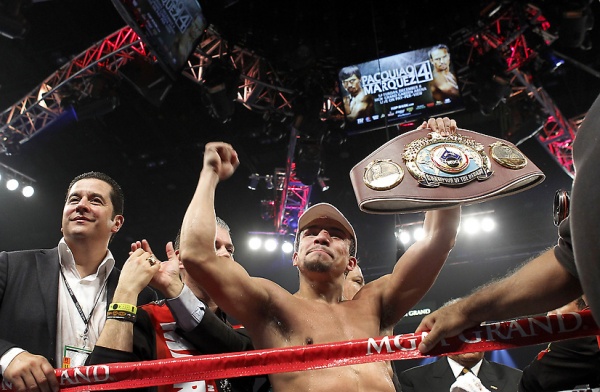 Juan Manuel Marquez: Bradley is The Best Option For Me Marquez views Bradley as the best possible option right now, because he wants to make history by capturing a fifth world championship in a fifth weight class. And what better time to do it than Mexican Independence Day.

“I will fight on a very important date for Mexicans, and it is a joy for me to fight for the welterweight championship on that day. [Bradley’s belt is] a title which belonged to me since 2011 but I was denied in the third fight against Manny Pacquiao and why shouldn’t I go and get what’s mine,” Marquez stated.

“To me, this is the best option. Bradley is the best welterweight and to be the best you have to fight the best. He is an undefeated fighter, elusive, difficult, so I must work on speed. I think the key [in this fight] will be to counter his speed.”

“Choosing Bradley was not difficult. I always had it in my mind that my victory over Pacquiao was very important, but I wanted to go forward and not backward [by fighting Pacquiao a fifth time], and Bradley is a challenge that I know the Mexican fans will like and I think it’s time to turn the page with this new goal.”