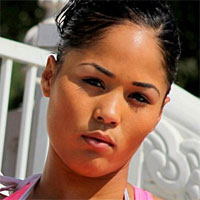 With the support of the #1 women’s boxing promoter in Mexico, WBO bantamweight Kaliesha “Wild Wild” West (14-1-3, 4KOs) of Moreno Valley, California, looks to conquer the Mexican boxing public with her mix of beauty and lethal skills. West, one of the female world champs in HG Boxing’s stable led by promoter Hector Garcia, returns to the ring and to Colima, the site of her debut bout with HG Boxing back in August. West will defend her WBO 118 lbs. strap as part of the “Erupción en Colima (Eruption In Colima)” fight card set for Saturday, October 29th.

In her last bout held on August 20th, West defeated Jessica Villafranca via a unanimous decision with scores of 97-95, 99-91 and 96-94 in Manzanillo, Colima, Mexico.

Now West will appear in the capital of Colima at the 74th Colima State Fair. The bout will mark West’s third defense that she captured last year by stopping Angel Gladney in seven rounds. West opponent is still to be confirmed.

“I am happy to return to Mexico once again and especially Colima,” West stated. “The people there are very nice and I am looking forward in showing again why I am a world champion.”

West trains in her hometown of Moreno Valley under the supervision of her trainer and father, Juan West. After road work every morning and then an eight hour shift as a hospital administrator, Kaliesha trains at night where she spars at least six rounds three times a week.