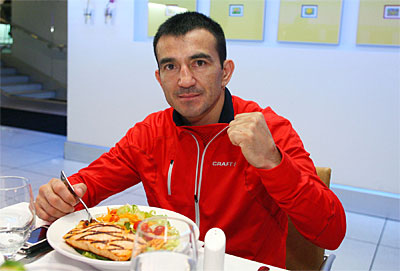 Looks like undefeated two-time world champion and current WBO Jr. Bantamweight Champion Omar Narvaez of Argentina isn’t having any weight issues as he sits down for healthy lunch as he prepares to take on WBC/WBO World Bantamweight Champion Nonito “The Filipino Flash” Donaire in his title defense, on Saturday in the Theater at Madison Square Garden. Promoted by Top Rank, in association with Madison Square Garden, Donaire vs Narvaez will be televised by HBO Boxing After Dark.

Narvaez and his team are at the Affinia Hotel on Seventh Avenue in Manhatthan in front of Madison Square Garden. His team consists of trainer Ruperto Ruiz, his brothers Jorge and Daniel, Dr. Franco De Turris, manager Osvaldo Rivero and Esteban Livera, owner of Luna Park.

Narvaez’s team reports that he trains twice a day. Aerobics in the morning and boxing in the afternoon. He is close to the weight and in good physical condition.