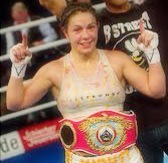 WBO/WIBF female flyweight champion Melissa McMorrow (8-3-3, 1 KOs) has signed with the SES boxing stable in Magdeburg, Germany. McMorrow, who lives in San Francisco, is in great demand since dethroning Susi Kentikian in May 2012 in Frankfurt (Oder). Most recently, she successfully defended her WBO title against Yahaira Martinez in Kissimmee, Florida. On March 23 McMorrow will be back on the German boxing stage on the undercard of the rematch between Arthur Abraham and Robert Stieglitz. “Germany has brought me good luck. This is a great country for my career,” said Melissa.

SES has also signed another American in super middleweight Dario Bredicean. German heavyweight icon Axel Schulz discovered Bredicean in Florida and brought him back to Germany where he will make his pro debut in Potsdam on Saturday on the card headlined by Ramona Kühne.