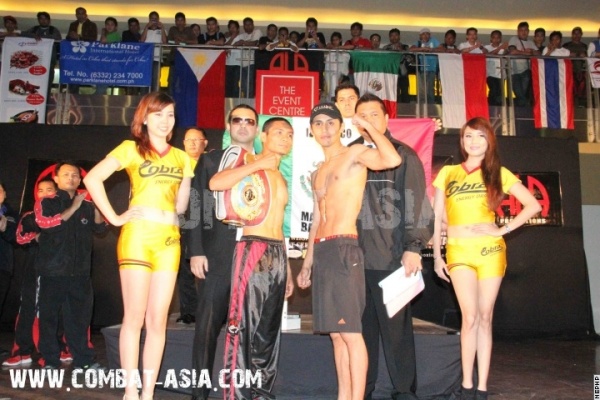 All the fighters on the main card of Pinoy Pride 18 made weight at the first attempt with Donny Nietes and Moises Fuentes both coming in at the 108 lbs mark ahead of their WBO Light Flyweight World Title fight tomorrow night.

The guest of honour was Marco Antonio Barerra who will be in the corner of Fuentes and before the fighters stepped on the scales he answered questions from the media.

A few eyebrows were raised when the Mexican legend responded to an inquiry about former opponent Juan Manuel Marquez’s new found punching power with the following response:

“Maybe he has a very good doctor!”

Jimrex Jaca weighed in 2 1/4 lbs over the light welterweight limit ahead of his fight with Rachamongkol Sor Pleonchit but with no title on the line the Thai fighter agreed to allow him the extra weight.