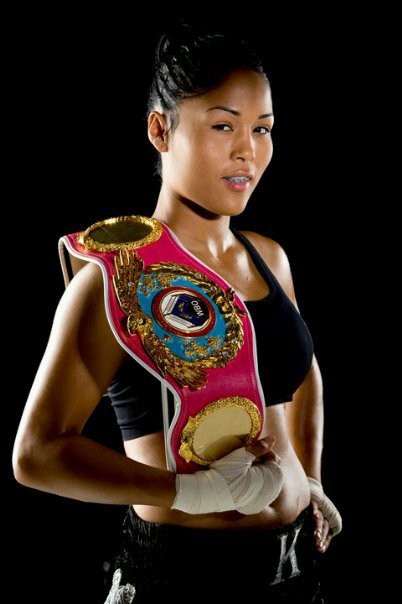 World Boxing Organization (WBO) Bantamweight Champion, Kaliesha “Wild Wild” West (Moreno Valley, California, 14-1-3, 4 KOs) will travel to Las Vegas, Nevada, to support the women’s championship boxing card on November 20, 2011, held at the Dallas Events Center, located within the Texas Station Gambling Hall and Hotel.  The main event will feature Ada “The Ace” Velez (19-3-3, 6 KOs) defending her IBF Super Bantamweight Title against Melinda “La Maravilla” Cooper (21-1, 11 KOs) in a 10 round bout.  This will be a rematch of their previous March 2011 bout in Costa Rica, which Velez won by split decision.  In addition, Stacy “Stay-Lo” Reile (10-3, 4 KOs) will defend her IBF Featherweight title against Dahiana Santana (27-6, 12 KOs).  Undefeated, Russian heavyweight, Magomed “Mago” Abdusalamov (11-0, 11 KOs) will take on Rich “Super” Power (15-1, 11 KOs).  Promising female boxer, Tatina “Lil’ Tyson” Anderson, will be featured on the undercard.
Sampson Boxing, LLC, is promoting the boxing card in association with Texas Station Gambling Hall and Hotel.  Also helping to bring women’s boxing back to Las Vegas is Pablo Betancourt, owner of Executive Entertainment, LLC, who teamed up with Sampson Boxing, LLC, and Texas Station Gambling Hall and Hotel to make this event a reality.  Like Kaliesha West’s promoter, Hector Garcia, Sampson Lewkowicz believes that women deserve to be showcased on major boxing cards in the United States.  Team West is not directly connected with the promotion of this fight, yet they believe it is extremely important for women’s boxing that a large amount of people support this event.  Kaliesha and Juan West will be taking a day off from training to attend the event.
Kaliesha West said, “I’m as excited for this fight as the boxing fans were for Pacquiao-Marquez, held last week in Las Vegas.  I’ve been in the ring with both of these women, so I know it is going to be an exciting fight for the fans and one to look forward to.  This fight has the opportunity to prove just how skilled female boxers can be.  America has been missing out on great boxing for too long.  The pool of women’s boxing talent is much better than it was in the 90’s, because women have had the opportunity to be mended in the amateurs, unlike earlier times when they weren’t allowed.  I hope everyone comes out to support women’s boxing on November 20th in Las Vegas.”
Juan West, her father, trainer and manager said, “I’m excited to travel to Las Vegas to see a female title bout in the main event.  This fight features two of the best female professional boxers in the United States, Ada Velez and Melinda Cooper.  Women are taking a step closer to gaining the recognition they deserve for all the hard work that they put in to their sport.  I’m traveling to Vegas to support this event, and I hope others follow as well. Hopefully, this fight is successful in gaining momentum towards women of this caliber being showcased live on all the major television networks.  I am looking forward to both women giving it their all.  It is time for the world to be impressed by the new era in women’s boxing.”
Kaliesha West was born in South Haven, Michigan, and began boxing at the age of ten.  Her family relocated to Moreno Valley, California, and she became a decorated amateur boxing star, winning 98 amateur bouts, including the 2003 National Golden Gloves.  She began her pro career in 2006, when she was just eighteen years old.  On September 18, 2010, she won the vacant Women’s WBO Bantamweight title on the under card of the Mosley-Mora Golden Boy Promotions PPV, by defeating Angel Gladney, via a seventh-round knockout.  The fight took place at Staples Center in Los Angeles, California and was held during the Mexican Bicentennial Celebration.

Kaliesha West, who is twenty-three years of age, signed with HG Garcia Boxing in July 2011.  On August 20, 2011, she successfully defended her WBO title against Jessica Villafranca, winning by a unanimous decision.  Due to unforeseen circumstances regarding her opponent, West’s title defense on October 29, 2011 was cancelled.  No date has been set for West’s next WBO title defense.