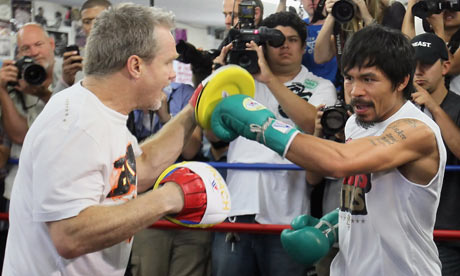 After the controversial decision in the Pacquiao-Marquez trilogy last Saturday, Mayweather said he was now open to fighting the Filipino champion.

“He [Floyd] has already expressed his willingness. We will not be pursuing him as we’ve been doing the past few years,” Roach said in Philboxing.com. “If we can get him [Floyd], we should take him.”

Roach, however, admitted that Pacquiao has the last say on his choice of opponent.

Boxing promoter Bob Arum earlier said he was willing to work out a rematch between Pacquiao and Marquez in light of the controversial outcome of their WBO welterweight title fight.

Pacquiao won a majority decision over the Mexican fighter in a closely-fought match.

Mayweather’s camp, on the other hand, is calling on Pacquiao to finally step up for their much anticipated superfight.

“Bob, obviously, wants Marquez on the strength of the closeness of the last fight (held Saturday at the MGM Grand) won by Manny by a majority decision. He has to talk with Manny and ask him who he prefers to face next,” Roach said.

“If Manny decides it’s Mayweather, then we will start mapping out the plans of training. If it’s Marquez, then we’ll also make plans to beat him convincingly ,” he said.