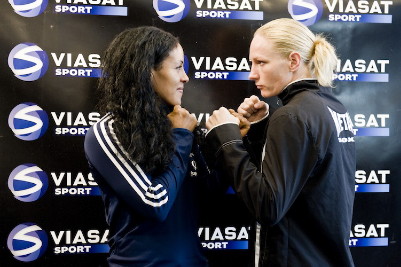 (Picture: Viasat Norway) Unbeaten WBA / WBC / WBO Female Welterweight Champion Cecilia Braekhus (20-0, 5 KOs) and Anne Sophie Mathis (26-2, 22 KOs) conducted an open-air work-out today in front of Oslo´s Central Station. Hundreds of fans were in attendance to watch the First Lady – a national hero in Norway – working the pads with coach Georg Bramowski. “It´s great to be in Oslo,” Braekhus said. “This is a great place to hold a public work-out. My training has been going very well. This is the biggest fight of my life, so we have been working really hard. It was also very inspiring to see Mathis. She looks fit and ready. But I am fit and ready, too, and I will defend my titles at Arena Nord on September 22. I look forward to fighting in Frederikshavn.”

Mathis, who only did some light shadow boxing, is convinced she will take all three world titles to France after their clash at Arena Nord. “I have a lot of respect for Braekhus,” the French powerhitter told the Norwegian media. “But I am 100 percent convinced that I will win. She is a technical boxer and not a big puncher. I have a lot more power.”

Meanwhile, Nisse Sauerland is thrilled to promote “the biggest fight out there.” He said: “This is the Pacquiao-Mayweather of women’s boxing and it´s happening. Cecilia is a three-time world champ, she is undefeated with amazing skills, while Mathis travelled all the way to Albuquerque to brutally knock out Holly Holm last year.

It will be an unforgettable battle at Arena Nord. Mathis has tremendous power but it won´t help her. Cecilia will outbox her, just like she has outboxed everyone else she has ever been in the ring with.”

Tickets for the Nordic Fight Night are available at www.arenanord.dk. Also in action will be WBA Intercontinental Middleweight Champion Patrick Nielsen (15-0, 8 KOs), who makes his first title defence against Jose Yebes (11-2-1, 5 KOs) of Spain.