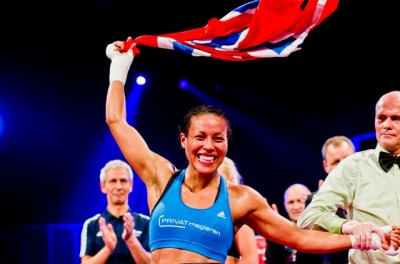 Brækhus prevails, sets sites on US

UPDATED: Norway’s champion boxer Cecilia Brækhus successfully defended her titles over the weekend, after  winning her latest match against Myriam Lamare of France. It marked Brækhus’ 24th professional victory, boosted her plans for a new match in the US and set off more jubilation. Norwegian boxer Cecilia Brækhus waves the flag after winning her latest match and defending her titles once again in Denmark, not in Norway, where boxing remains illegal. PHOTO: Vegard Grøtt / NTB Scanpix

“The only reason she (the 39-year-old Lamare) was still standing was her 20 years of experience,” Brækhus, age 32, told state broadcaster NRK’s website with a laugh late Saturday night.

Lamare literally put up quite a fight at the beginning of Nordic Fight Night in Frederikshavn, Denmark, but Brækhus held out and knocked her down during the seventh round. Lamare got up again, but NRK’s commentators claimed she was noticeably weaker and the match ended after 10 rounds. Lamare smiled bravely afterwards and claimed she’d been through tougher matches, but she graciously praised her opponent’s performance. “Cecilia was very strong, and an incredibly good boxer,” Lamare told reporters. “For me, the time has come to step down. I wish Cecilia all the best in her career.”

Brækhus has a new coach, Otto Ramin, and she said the match reflected that they’d only worked together for six weeks, “but we have trained explosively, and that came through in the match,” Brækhus told NRK.

Ramin himself seemed satisfied with his new pupil, who retained her unofficial international title as the world’s “First Lady” of boxing. “She fought a very good match,” Ramin said. “She was smart and boxed wisely.”

Haven’t given up on a match against Holm
Now Brækhus seems more keen than ever to box at a title match in the US, and her promoter Nisse Sauerland told newspaper Aftenposten that they’re working once again to lure former champion Holly Holm back into the ring. Sauerland said Brækhus “deserves” to show what she can do in the US.

“We’re working to set up a match in Las Vegas or New York,” Sauerland said. “We have said, though, that we won’t send Cecilia to Holm’s hometown of Albuquerque.”

Saturday’s match played out once again in Denmark, since boxing is banned in Norway and Brækhus isn’t legally allowed to conduct her sport in her own homeland. There have been moves to change that and regardless, Brækhus, who grew up in Bergen,  said she thinks her future “looks very bright.” She was thrilled by the reaction of fans who traveled to Frederikshavn to see her in action.

“I have had many tough matches, but the support here is great,” said Brækhus, adding that she already was looking forward to new training sessions. “To stand up in the ring with that kind of support behind me is just unreal.”