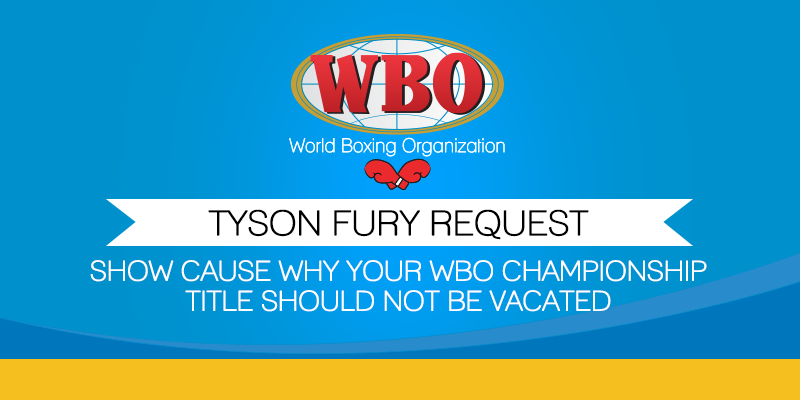 We have received and thank you for the response to the WBO’s September 26, 2016 Certification Request of your Medical Report of September 21, 2016 and the Supplemental Report of September 28, 2016 concerning the conditions described therein. Everyone at the WBO is concerned for your health, well-being, happiness and prospects for a full and complete recovery.

The reports, however, continue to be provisional and conditional. The September 21, 2016 report indicates a report is being prepared which will contain the relevant chronological events and antecedents to your condition. The September 28, 2016 Supplemental report also states that the prognosis is conditioned on the absence of any other psychological issue.

A rematch was scheduled for July 9th 2016 but never took place due to your training injury on June 24th 2016 that we heard of through the news. Immediately, the WBO requested an Interim Certification of your recovery status from your training injury.

The rematch was rescheduled for October 29th in Manchester, UK. Notwithstanding, on September 14th, the WBO sent the sanction for the bout. The sanction stated the following provisions:

By September 23rd 2016, the bout is again postponed and the WBO finds out through the news, prompting the Committee to request the second Interim Certification on September 26th.

Additionally, the WBO has received the September 29th VADA Drug Testing Report, VADA3769 (D5CO3) containing an adverse analytical finding from a September 22nd test. We ask you to advise if you have requested analysis of the “B” Sample. Also, the WBO received information from the BBB of C that you refused to be tested the week prior to September 22nd.

When you signed the rematch contract, you agreed to the following:

Rule 19 of the WBO Regulations of World Championship Contests provides:

(a) If a World Champion fails to comply with his contractual obligation to fight in a WBO World Championship bout without justifiable cause, or tests positive for an illegal or any performance enhancing drug after a title bout, or fails to inform the WBO of any medical condition, impairment or any other circumstance which jeopardizes his participation in a WBO World Championship contest, or if a Champion or any of his team members misleads, attempts to mislead, or petitions a Local Boxing Commission to illegally or incorrectly license said Champion, the Committee may recommend to the WBO President and to the Executive Committee that the fighter be stripped of the title and that the title be declared vacant.

SECTION 5. DEFENSE OF THE TITLE

“ …(c) The WBO World Championship Committee may, in its discretion, vacate a Champion’s title regardless of cause or fault if the Champion fails to defend his title within a nine (9) month period (12 months in the case of the Heavyweight Division). This decision will be final unless appealed to the Complaint and Grievance Committee within ten (10) days of Notification to the Champion as provided for in these Rules. A Champion so stripped of his Title shall be classified using the WBO rating criteria, and he shall be classified in his division or in such other weight division as the Classifications Committee for good cause determines, provided that he has complied with the WBO and ABC rating criteria…”

The general principle of the Regulation states as follows:

“…The World Championship has been established for generations as the highest objective in professional boxing. A World Championship is not the property of any boxer. The Championship is a trust, subject to the conditions defined herein, for the use and benefit of all boxers and boxing fans, who through their contribution of time, effort, risks and resources sustain the existence of the profession. The World Boxing Organization encourages each World Champion and Challenger to be an example of the highest ideals and spirit of sportsmanship. A World Champion is an integral part of the sport of boxing, but he is not greater than the sport of boxing. A World Champion’s sportsmanship shows his respect for the profession he has chosen, including the Champion himself, his opponent, the World Boxing Organization, and, most importantly, boxing fans worldwide…”

According to the Regulations, Section 1(7) (21), the World Championship Committee shall have the following authority:

“…(7) To recommend to the President and the Executive Committee that a Title should be vacated if a Champion fails to comply with the WBO World Championship Rules; and

Taking all of the previous under consideration, the WBO Championship Committee decided that you have ten (10) calendar days, final and non–extendable to show cause why your title should not be vacated due to inactivity, breach of contract and performance enhancing drugs and stimulants.