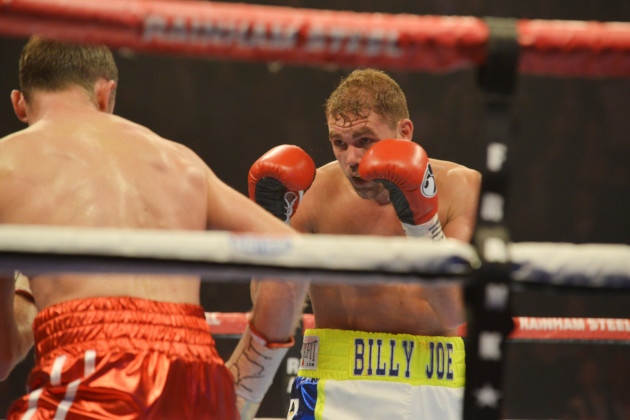 Billy Joe Saunders doesn’t believe he’ll be at his ‘career best’ when he makes his maiden WBO world middleweight title defence against Russian Artur Akavov but he is hoping to ‘blow the cobwebs off’ en route to a successful first victory as champion.

The Hatfield fighter steps back into the ring on Saturday, October 22, for the first time since snatching the belt from Irishman Andy Lee in Manchester almost 10 months ago.

Saunders has been added to the ‘Little Less Conversation’ show at Cardiff’s Motorpoint Arena.

The 27-year-old has been hampered by a combination of injuries and fruitless negotiations leading up to his first defence and he’s not taking the prospect of European WBO middleweight champion Akavov, who is on an 11-match winning streak, lightly.

Speaking at a pre-fight press conference in London on Monday, Saunders said: “There was the hand injury which stopped me fighting [Max] Bursak [in April] and from then onwards it’s been very frustrating for me.

“I’ve got a new date now and I’m not overlooking him [Akavov].

“He went to the World Championships with Russia so he has some pedigree, has only lost once and I’ve been out of the ring for nearly 10 months.

“I personally don’t think this will be my career best, I need to blow some of the cobwebs off but I know I’ve got to look good doing it and then we’ll look at a big fight in the new year.”

Should his first defence go to plan, Saunders is open to getting back into the ring in December but says he is aiming for a date in February or March next year – against either feared unified WBA, WBC, IBF and IBO middleweight champion Gennady Golovkin or WBO light middleweight king Saul ‘Canelo’ Alvarez.

He continued: “I’m not overlooking anyone but the next big fight I want after this is one of Canelo or Golovkin. My goal is Golovkin in February or March.

“Am I good enough for Golovkin? There’s only one way to find out.

“If I don’t rise to the occasion I’ll get sharply found out. I believe I can beat him.”

He added: “He’s not invincible. If he wants to fight in December I’m ready. A unification overrules a mandatory so he can do it if he wants to. I’ll go to America and fight him. Canelo? I’ll beat him seven days a week and twice on a Sunday.”

Promoter Frank Warren added: “We’re not looking past this fight against Akavov.

“Everyone just thinks he’ll turn up on the night and that’s it.

“Providing Bill comes through this fight and comes through it well, doesn’t sustain any hand injuries and nothing goes wrong then we’ll look at either Golovkin or Canelo.”