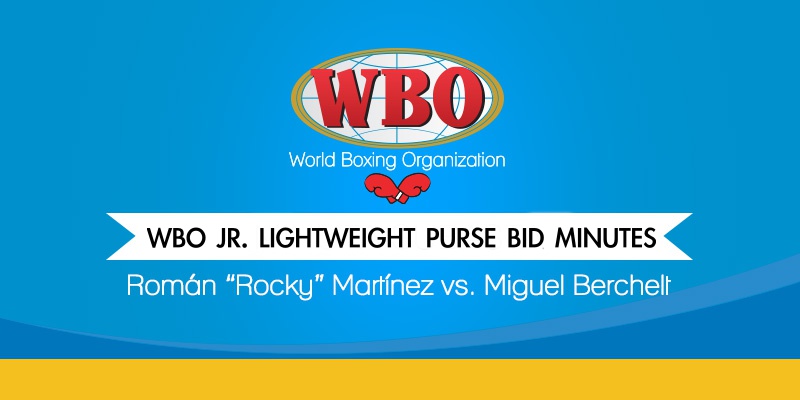 Prior to commencing the Purse Bid, Mr. Peter Rivera made note that a Complaint had been sent regarding the designation of Miguel Berchelt as Mandatory Challenger for Roman “Rocky” Martinez in the 130 pound division because such designation did not meet the requirements of WBO Regulations of World Championship Contests. He also stated that Roman Martinez had a contract with the Showtime Network for a match facing Orlando Salido on March 12, 2016.

The intention was to stop the Purse Bid.

President Francisco Valcarcel presided the Purse Bid and stated for the record that the designation of Miguel Berchelt as the 130 lbs. Mandatory Challenger had been made during the WBO Convention on October 29, 2015 in Orlando, Florida. Furthermore, he stated that Mr. Peter Rivera, representing Roman Martinez, as well as Mr. Sean Gibbons, representing Orlando Salido, had accepted the Mandatory Challenger designation and had pledged that the winner of the bout between Roman Martinez and Orlando Salido would face within 120 days of the bout the Mandatory Challenger, Miguel Berchelet.

That at the time, neither Mr. Rivera nor Mr. Gibbons, protested the appointment of Mr. Berchelet as Challenger.

That the Championship Committee voted and approved Mr. Peter Rivera’s request for a Martinez-Salido III bout and that the winner had to face the designated Mandatory Challenger, Miguel Berchelt, within 120 days.

President Valcarcel stated for the record that Mr. Peter Rivera did not have any commitment with the Showtime Network for a March 12, 2016 bout, nor had he had one for February 20, 2016.

Mr. Valcarcel added that both Sean Gibbons, Orlando Salido’s manager, as well as Promoter Fernando Beltran, had advised him that Peter Rivera had not offered them the necessary guarantees that Showtime Network had given PR Best Boxing DBA The Brothers Entertainment the March 12, 2016 date to hold the Martinez-Salido III bout. That Mr. Peter Rivera had not sent the P.R. Professional Boxing Commission any letter stating that they committed themselves to the WBO appointing the officials of the bout and that these could not be Puerto Rico officials.

For the reasons stated above, Attorney Francisco Valcarcel proceeded with the Purse Bid given that sufficient time had been allotted to finalize negotiations, without reaching the necessary conditions for the bout to take place.

Mr. Peter Rivera announced that he would not bid.

The Purse Bid proceeded in accordance with the conditions established therein by the WBO Championship Committee regarding the 10% deposit in a certified check or cash and that the balance amount had to be deposited by the Purse Bid winner no later than 15 days after the Purse Bid.

It was stated for the record that both parties gave proof that they were World Boxing Organization Bona Fide 2016 promoters.

All Star’s second envelope contained a certified check in the amount of $20,150 (Twenty Thousand One Hundred Fifty Dollars) corresponding to 10% of $201,500 (Two Hundred One Thousand Five Hundred Dollars) with their three proposed sites and dates.

Zanfer submitted a certified check in the amount of $25,100 (Twenty-Five Thousand One Hundred Dollars) corresponding 10% of the Purse Bid amount of $251,000 (Two Hundred Fifty-One Thousand Dollars) and proposed the following dates:

Taking into consideration both proposals, the Purse Bid was awarded to Zanfer Promotions, who must deposit within the 15 days from the date of the Purse Bid, the amount of $225,900.00 (Two Hundred Twenty-Five Nine Hundred Dollars) on behalf of World Boxing Organization to be deposited into the “Escrow” account.

Zanfer shall submit within 10 days the fighters contracts and the fighter have 10 days to sign the same and then, the contracts must be sent to the World Boxing Organization.

If the conditions herein exposed are not met, the second bidder, All Star, is entitled to be awarded the Purse Bid, having met within five (5) days the deposit of balance stated in the Purse Bid.