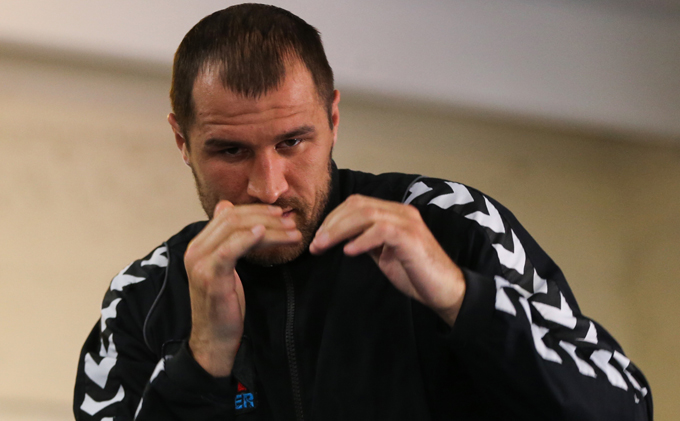 WBA/IBF/WBO light heavyweight world champion Sergey Kovalev talked about his January 30 grudge rematch against Jean Pascal at a press workout on Thursday at the PAL Gym in Boca Raton, Florida.

Do you want to make him retire?

“I want this, we’ll see. But usually all my opponents stop their career or move their division, but last fight I didn’t finish my job.”

Why fight Pascal again when the first fight seemed so easy?

“First of all, Pascal has said bad things to my side. I have a reason for fighting him. I think Pascal has reason to say thank you to Luis Pabon, the referee for the fight. He forgot to say thank you very much that he saved his health and life maybe. Because he was already “drunk”, you know like spaghetti legs.”

Why fight in Canada?

“I love Canada and Canadian fans. Canada reminds me so much of my home town in Russia. Same atmosphere. Lot of details remember me of my home town and I feel very comfortable in Canada. Big support from Canadian fans. And second thing why I fight in Canada, because Pascal doesn’t want to go to America to fight me or in Russia either. He’s fighting only in his hometown. Ok, I’m ready to kick his ass in his hometown.”

What changed in your training coming to this fight?

“Because I was disappointed in my performance in our last fight against Pascal I want to do this much better, much more clear. “I felt very comfortable (in last fight). Judge gave to him two rounds, but I didn’t feel I lost these rounds. I just take time, used a lot of jabs and get lot of points with the jab.

“I don’t feel comfortable to make any prediction because it is boxing, anything can happen. It’s not my habit to say, I will, will, will. Because sometimes you say will and something else happens and then you look like a trash talker. You know? “Pascal is a trash talker. I don’t care what he say because it’s just trash from his mouth. He start speaking trash to (make me) lose my mind and make me nervous; he will pay for this in the ring. Believe me. I am going to make him pay for this.

“It is a more personal fight (because of trash talk).”