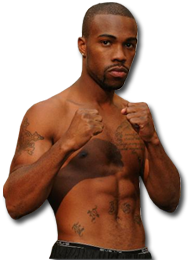 Russell, who has three boxing brothers, started boxing in 1995 and is trained by his father. In 2004 he became Junior Olympic Champion.

In November 2005, at the world championships in Mianyang, Russell beat Bulgarian Detelin Stefanov Dalakliev, 25-21, in the first round; dec. Canadian Tyson Cave, 22-9, in the second round; dec. Jordanian Al Gharaghir Ibrahim, 34-13 before losing to German Rustamhodza Rahimov, 28-17 thus winning the bronze medal at age 17 (joining Rau’shee Warren) and was named 2005 USA BOXING Athlete of the year.

Russell repeated his national title win in 2006, at the US championships 2007 injuring his hands in the process.

At the Olympic Trials 2007, Russell sensationally lost to Roberto Marroquin in his first fight (17:18), his first defeat to a countryman in eight years, but beat him twice later and bested national champion Rios to qualify. Russell became only the fourth boxer in U.S. team history to lose in the opening round and rebound to win his weight class, the others were Evander Holyfield, Roy Jones, Jr. and Floyd Mayweather, Jr.

At the 2007 World Amateur Boxing Championships in Chicago, Russell beat Ali Hallab to qualify for the Olympics but was beaten soundly by Russia’s eventual winner Sergey Vodopyanov 16-6 and didn’t medal.

Russell’s quest for a medal ended prematurely as he missed the Olympic weigh-in hours after losing consciousness in his Olympic Village dorm room.

Russell stopped Antonio Reyes at 0:21 of the third round of his pro debut, as he began his ascension to the top of the division.

Russell Jr made his HBO debut on Saturday night against Leonilo Miranda, the co-feature to the Jan Zaveck vs. Andre Berto main event from the Beau Rivage Casino in Biloxi, Mississippi.

On November 26, 2011, Russell was originally scheduled to face Dat Ngyuen, who was forced to withdraw after suffering a knee injury last week during training camp. Instead, Russell defeated Mexico‘s Heriberto Ruiz on November 26, 2011 at the US Bank Arena in Cincinnati, Ohio with a stunning knockout at 2:12 in the first round.