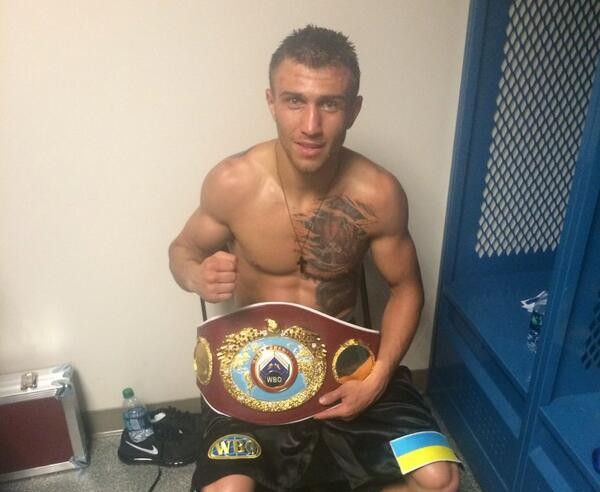 Two-time Olympic gold medalist Vasyl Lomachenko (2-1, 1 KO) scored a twelve round majority decision over previously undefeated Gary Russell Jr. (24-1, 14 KOs) to win the vacant WBO featherweight world championship on Saturday night at the outdoor StubHub Center in Carson, California. Lomachenko outworked Russell in rounds one and two, while Russell was busier in rounds three and four. Lomachenko had a big round five. After that Russell was able to keep Lomachenko at bay at times with non-stop punching, but the Ukrainian came on strong down the stretch. Scores were 114-114 (Lisa Giampa), 116-112 (Pat Russell), 116-112 (Max DeLuca). Lomachenko ties the record of Thailand’s Saensak Muangsurin in winning a world title in his third pro fight.

In a battle of U.S. Olympian heavyweights, 2012 Olympian Dominic “Trouble” Breazeale (11-0, 10 KOs) scored an entertaining third round TKO against 2004 Olympian Devin Vargas (18-4, 7 KOs). Breazeale punished Vargas in round one, driving him back with thunderous shots. Breazeale dropped Vargas in round two. Vargas had a pretty good round three until turning his back to Breazeale after taking a shot over the ear. Time was 2:26.

In an ugly six round light heavyweight bout, Vyacheslav Shabransky (9-0, 7KO) won a unanimous decision victory over Michael Gbenga (15-15, 15KO). Shabransky forced the action but Gbenga chose to hold a lot including after any punches he threw, providing flashbacks of John “The Quiet Man” Ruiz. Shabransky scored a fknockdown in the first round from an accumulation of punches mostly on Gbenga’s gloves but Gbenga was never in serious trouble. Judges scored the bout 60-52, 59-53 and 69-52 in favor of Shabransky.

Sharif “The Lion” Bogere (25-1, 17KO) easily overpowered Miguel Zamudio (28-5-1, 16KO) to win a TKO victory at 3:00 of the third round when the bout was stopped by the ringside physician following the third round of a scheduled eight round junior welterweight bout. Bogere hurt Zamudio early and often with body shots and then went headhunting in the second and third rounds staggering him at various times.

Michael “The Bounty” Hunter (5-0, 3KO) easily outboxed Jerry Forrest (7-2, 6KO) en route to a shutout unanimous decision victory. All three judges scored it 80-72 in this eight round heavyweight bout although at 207 pounds, Hunter is just barely a heavyweight and looks better suited for the cruiserweight division.

In a four round welterweight bout, debuting Fabian Maidana (1-0), younger brother of Marcos Maidana, won a unanimous decision victory over fellow debutant, Eddie Diaz (0-1). Judges scored it 40-36 (twice) and 39-37 and there were no knockdowns.

Mark Hernandez (2-0) easily outboxed Dante Spinks (0-5) to earn a shutout victory of 40-36 on all three judges scorecards in a four round super welterweight bout.