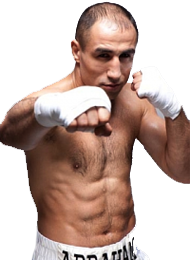 Arthur Abraham was born on 20 February 1980, in Yerevan, Armenia to parents Grigor and Sylvia Abrahamyan. His little brother, Alexander, is also a professional boxer and his older brother, Christian, owns a furniture shop. He moved to Germany with his parents and brothers at the age of 15. He became a citizen of Germany in August 2006.

Abraham boxed as an amateur in Bamberg and later in Nuremberg. He was an International Junior Welterweight German Champion in 1997 and a three time Senior Light Middleweight Armenian Champion in 2000, 2001 and 2002. His final amateur record was 81-3-6 (48 KO).

In 2003, Arthur and Alexander competed alongside promoter and manager Wilfried Sauerland and his head coach Ulli Wegner. Arthur was a sparring partner for IBF and WBA Super MiddleweightChampion Sven Ottke, whom was in the preparations of a title defense. Wegner was so impressed that he began to train Arthur personally.