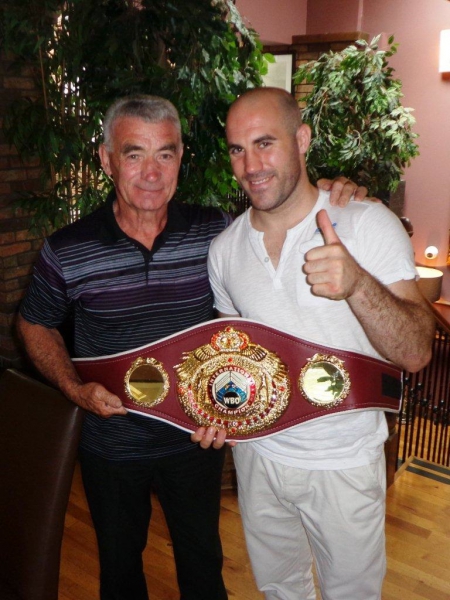 The breakfast was hosted by the Sub Contactors Association of Ireland at the Il Primo Restaurant at the Silver Key. Gary’s family as well as officials of the Ex-Boxers Association and representatives from various sporting and community groups were all in attendance.

The guests were warmly welcomed by Michael O’Brien,  Director of the Irish Sub Contractors Association, and in his address Mr O’Brien said the achievement of Gary ‘Spike’ O’Sullivan was both Historical and unique in that no Cork Boxer had ever won a WBO Title.

This title was won following a unanimous points victory over Mathew Hall at Upton Park London. Mr O’Brien said:  “Gary had now become a trail blazer on Lifting the WBO title and this was quickly followed by our  own Olympic boxers who succeeded in winning gold, silver and bronze medals.”

Pointing to the World Boxing Association Belt, Mr O’Brien said: “Gary is an inspiration to all and has become a role model and  many youngsters  can  now attempt to emulate his success.”

Receiving a standing ovation the new WBO International Champion approached the podium where Mr Willie O’Leary, President of the Ex-Boxers Association made a presentation to Spike.

Former Lord Mayor of Cork Brian Bermingham who is also Vice President of the Ex Boxers congratulated Gary before announcing details of the various sporting grants being allocated to Cork boxing clubs from the Sports Council of Ireland.

To mark the occasion and as a fitting tribute Gary was presented with a specially commissioned Medal which detailed the historic success.