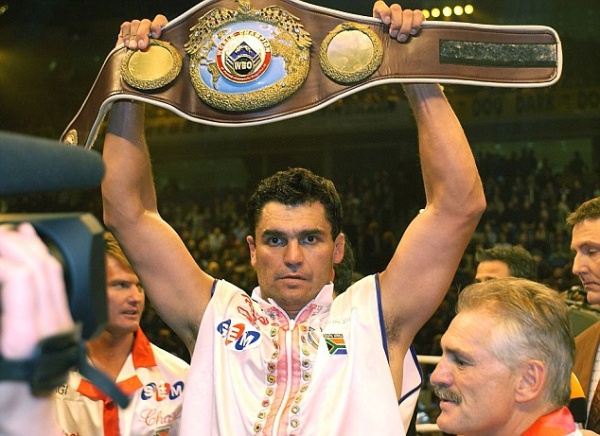 THE WORLD BOXING ORGANIZATION MOURNS THE UNTIMELY & TRAGIC DEMISE OF OUR FORMER CHAMPION CORRIE SANDERS.  WE WISH TO EXPRESS OUR DEEPEST SYMPATHY TO CORRIE’S FAMILY AND FRIENDS.

MAY HIS SOUL REST IN PEACE!

Corrie Sanders shot dead
The South African who knocked out Wladimir Klitschko has been shot dead in an apparent robbery.

Corrie Sanders, who held the WBO heavyweight title after knocking out Klitschko in Germany in 2003, died after a shooting incident near Brits, north of Johannesburg, on Saturday.

Early reports on News24 and in Sunday newspaper Rapport said he died of a stomach wound after being shot during a birthday party at a restaurant. He was 46 years old.

Sapa reports that Sanders died in Kalafong Hospital on Sunday.

Police said he had been celebrating the birthday of his daughter when three armed men arrived in the restaurant and shot randomly.

Police brigadier Thulani Ngubane said Sanders was shot in the hand and stomach. It appeared the gunmen had gone to the restaurant with the aim to rob it.

“They shot randomly and took a cellphone of the daughter, who was turning 21, and they also took a bag of another patron,” he said.

However, Thatch Haven Country Lodge’s owner Johan de Jager said Sanders was there to celebrate the birthday of his brother’s son. “Michael’s son was turning 21, and Corrie was also there when the gunmen came,” he said.

Sanders, who was also a single-handicap golfer, sensationally stopped Klitschko in the second round in Hannover.

Having taken the fight at short notice, the southpaw South African was the 40-1 underdog. He dropped the Urainian twice in the first round before the referee stopped the bout in the second.

In his next fight, in 2004, he fought Vitali Klitschko, losing on an eighth-round stoppage in Las Vegas where they met for the vacant WBC title.

Sanders also knocked down Hasim Rahman with a trademark round-house blow in the second round but lost the fight in 2000 in the seventh round.

He made his professional debut in 1989 and had his last fight in 2008, when Osborne Machimana knocked him out in the first round.

He first held the SA heavyweight title when he beat Johnny du Plooy in 1991. He also beat Otis Tisdale and Michael Sprott, both well-known American heavyweights.

Sanders finished with a professional record of 42-4, with 31 knockout wins.

RON JACKSON writes that Sanders was born in Johannesburg on January 7, 1966.

His first fight was in Cape Town where he stopped King Kong Dyubele in the first round. He then won his next 22 fights, 15 inside the distance, before being knocked out in the second round by Nate Tubbs at the Carousel, Hammanskraal on May 21, 1994.

On July 27, 1991 he knocked out Du Plooy in the first round to win the vacant SA heavyweight title at Sun City.

He had only six fights from 1998 to 2002, which included the seventh-round stoppage loss to Rahman in Atlantic City in May 2000.

After beating Wladimir Klitschko, he relinquished the WBO title to challenge Vitali for the WBC belt in April 2004. He held his own in the early rounds but tired before he was stopped in the eighth round.

He beat Alexi Varakin, Colin Wilson and, in May 2007, Daniel Bispo from Brazil before losing to Machimana in his last fight on February 2, 2008

‘In the midst of the celebrations, at about 7.45pm in the evening, about three suspects came in.

‘They were planning to commit an armed robbery.

‘Then in the armed robbery they shot randomly. Corrie was shot in the hand and also the stomach.

‘They fled with a digital camera and also a handbag of one of the people who was in the restaurant.’

There have been no arrests in the case, he added, but stated police are ‘in hot pursuit’.

Mr Sanders shot to fame nine years ago after flooring his Ukranian opponent, Wladimir Klitschoko, twice in the opening round before the match was stopped in the second.

He gave up the belt the following year to fight Wladimir’s older brother Vitali for the vacant WBC crown, but was defeated.