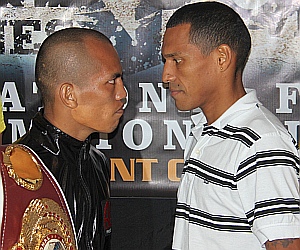 The WBO vice president for the Asia Pacific region and supervisor at the recent WBO International flyweight championship between undefeated Milan Melindo and former WBA Interim champion Jean Piero Perez of Venezuela believes that while it was a close fight, Melindo deserved the victory.

Leon Panoncillo told BoxingScene.com/Manila Standard “it was surely a close fight” as reflected in the scorecard of one of the judges, Salven Lagumbay who scored it even at 114-114 and noted that even some fight fans saw it for Perez.

The respected fight supervisor said “of course if they had only looked at the latter part of the bout or the last five rounds, they had a reason to say that Perez won because of Melindo getting tagged with jabs and combination delivered by Perez on the latter rounds, which is understandable.”

However, the top WBO official in the region said “as you know its a twelve round championship fight and we have to account for the whole 12 rounds to determine the winner.”

Panoncillo said that in his eyes “ Melindo surely did enough on the early rounds from rounds 1 to 7 to rack-up the points with effective body punches and counter punching.”

Panoncillo noted that Melindo seemed “worried about his cut rather than focusing on what he had done in the early rounds.  The accidental  head butt that cause the severe cut on the 8th was surely a factor and the corner-men  did not have the composure to advise Melindo what to do.”

However, Panoncillo was convinced that at the end of the fight Melindo “ had done enough in the points category in the earlier rounds which gave him the winning verdict.  This bout was not a controversial decision. Melindo won because of the earlier lead he had sustained until the end of the 7th round.”

The WBO fight supervisor said “Anyway, it was a learning lesson for him (Melindo)and I am sure it will give him more ideas what to work on in the gym.”