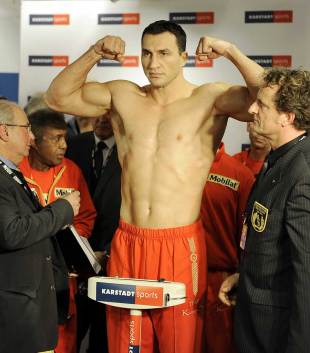 An IBF purse bid was scheduled for Tuesday, but it was canceled when they came to an agreement. IBF championship committee chairman Lindsey Tucker said the organization received a letter from the fighters’ handlers letting him know a deal had been made.

“There is no purse bid because we made a deal,” Finkel said.

Had it gone to a purse bid, Klitschko would have been entitled to 85 percent of the winning bid with Thompson due 15 percent. Terms of the deal were not disclosed.

The fight is slated to take place at a soccer stadium in Berne, Switzerland. Klitschko, who is from Ukraine, usually fights in Germany — where he has fought his last seven fights — although his older brother, fellow heavyweight champion Vitali Klitschko, made a 2009 title defense against Kevin Johnson at a hockey arena in Berne.

Since then, Thompson has won five consecutive bouts, each by knockout, to again become Klitschko’s mandatory challenger.

Dan Goossen, Thompson’s promoter, had hoped to make a deal to the bring the fight to Washington, but Klitschko was not interested because the money would be greater in Europe.

If Wladimir Klitschko defeats Thompson, he does plan to return to the United States for a tentative Nov. 10 title defense against American Cristobal Arreola at Madison Square Garden in New York in a fight that HBO is interested in broadcasting.

Klitschko’s last fight in the U.S. was also at the Garden, where he won a lopsided decision against Sultan Ibragimov in a title unification fight on Feb. 23, 2008.