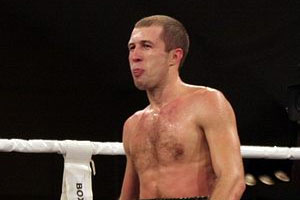 On April 14, Ukrainian boxer Sergey Fedchenko (30-1, 13 KOs) will battle future Hall of Famer Juan Manuel Marquez (53-6-1, 39 KOs) for the interim WBO light welterweight title at the New Mexico City Arena in Mexico City. This news has become a big sensation in Ukraine and Fedchenko has drawn the attention of reporters and millions of boxing fans. Although Marquez is a fearsome opponent, the 30-year-old Fedchenko is also a very experienced boxer, who is technically solid and a very strong puncher.

“For me, it was unexpected news,” said Fedchenko. “To fight against Marquez is a great honor for me. I am happy that Juan give me a chance. The only problem is little time to prepare for battle. But I’ll make sure that on the day of the fight I’ll be in the best shape of my career.”

Sergey started his professional career in 2002. In the early years, he was fighting against unknown fighters, but all that changed when he became promoted by the Klitschko brothers. In 2008 he won his first championship, the IBF Inter-Continental belt, when he knocked out Argentine journeyman Juan Alberto Godoy. But a year later, the Ukrainian lost a close twelve round decision against South African sensation Kaizer Mabuza.

Many think the fight could be a mismatch, but Sergei disagrees. “I know that I can surprise Marquez,” he stated. “He’s an excellent counter puncher, but I’m technical, I’m smart and I’m fast. For this I received the nickname of “The Professor”. I’ve seen Marquez-Pacquiao. It was great. But I’ve also seen Mayweather-Marquez. Floyd beat him with technique and speed. He’s very smart and I am too. Do I think I’ll win on the scorecards in Mexico? Probably not. So I need to be active. I’m willing to take risks and give Marquez a spectacular fight. Now for me it’s important to prepare well for the fight. I should be well prepared physically. It’s very important to me so I can fight at a fast pace for twelve rounds. This is the most important fight of my life. This is my first fight for a world title and my opponent Juan Manuel Marquez. It’s unbelievable.”

Since the Mabuza fight, Sergey’s most notable wins were against former champion DeMarcus Corley fast Frenchman Willy Blain (whose only other loss was to Lamont Peterson). But Fedchenko is now ready for new heights.

“I know that the predictions of experts and the bookmakers are on the side of Marquez. This is my chance, as it was in Rocky Balboa. Remember that? I want to fight it. No one believed him, but he was able to make a sensation. I can do it too. Each of us when he goes into the ring only wants one thing – to win. I want to win. I have faith. If I didn’t believe that I could beat Marquez, I wouldn’t agree to fight him.”