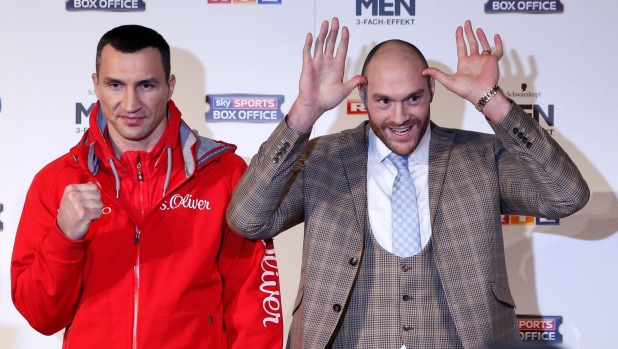 (Credit:  Photo by Lee Smith/Reuters)       Wladimir Klitschko will be looking to put an end to Tyson Fury’s antics.

Tyson Fury’s promise to end Wladimir Klitschko’s long heavyweight reign in Duesseldorf on Saturday is nothing the defending champion hasn’t heard before.

Unbeaten in 22 fights since April 2004, when he lost by TKO to Lamon Brewster in Las Vegas, Klitschko has heard a succession of challengers talk up their chances before he answered them in the ring.

Bryant Jennings, Alexander Povetkin, Mariusz Wach, David Haye and Ruslan Chagaev have all come and gone, among a list of fighters to have their pretensions to his throne rudely dismissed.

None serenaded Klitschko before their bout, however, as Fury did Wednesday with his own version of the Bette Midler tune “Wind Beneath My Wings.”

The Briton goaded him during their staredown the day before, asking for a smile “let’s see those teeth” and complimenting him on the way he smells.

He coaxed the flicker of a smile from Klitschko, who otherwise remained impassively still.

Fury’s antics –  he recently dressed up as Batman and wrestled a man wearing a Joker costume to the floor at a news conference in England – have added another level of intrigue to Saturday’s fight.

Boxing fans delight in the entertainment factor Fury provides, though it remains to be seen if he will be able to do the business in the ring, too.

Unbeaten in 24 professional fights, including 18 knockouts, the 2.09-meter (6-foot-9) Fury has seen off the likes of compatriot Dereck Chisora (twice) and American Steve Cunningham.

He is a former British, Irish, European and Commonwealth champion, but Klitschko will provide by far his biggest challenge with the 39-year-old Ukrainian’s WBA, WBO and IBF and IBO belts on the line.

“He’s done a lot of things in boxing,” Fury said at his gym in Bolton, northwest England.

The unmistakable respect is mutual. Klitschko, whose record is 64 wins with 53 knockouts from 67 fights, said Fury’s admission that he was nervous showed he was “well-prepared and alert.”

“It’s good to be nervous,” Klitschko said. “I’m nervous before every fight. I have to confront it. This is fact.”

The 1.98-meter (6-foot-6) Klitschko will be in the unusual position of facing someone taller, though Fury tends to crouch when he fights, giving away some of that advantage.

The fight was originally supposed to take place on Oct. 24 but was postponed after Klitschko tore a tendon in his left calf during training. Fury claimed he had scared off the Ukrainian.

“I didn’t believe this fight was going to happen for a long, long time. And he’s proved me wrong. This fight is actually going to happen,” the 27-year-old Fury said this week. “So like I said, I’m coming and I’m coming very fast for you Wlad. Hope you prepared well, and I know you will have done. Old guy, young guy, old champion, new champion. `Nuff said.”

A dispute over gloves still has to be settled. The contract stipulates that Fury must wear Paffen gloves, which the Briton found were hurting his thumbs after training with them for some time. New gloves were designed but had yet to be delivered.

Born in Manchester, England, the deeply religious Fury is of Gypsy heritage and comes from a bloodline of bare-knuckle champions on both sides of his family. His father, John Fury, will be in his corner after being released on parole following his 2011 conviction for gouging a man’s eye out in a brawl and a large contingent from the family will be in Duesseldorf to support him.

Fury is coached by his uncle Peter, who said his nephew is in the best shape of his career.

“He’s the happiest I’ve seen him because he’s fighting for such a title,” Peter Fury said.

“There’s going to be 55,000 people and to perform in front of those and people around the world, it’s what he revels in. He’s 110 percent prepared. This is the stiffest test Wladimir Klitschko will have had in his career.”