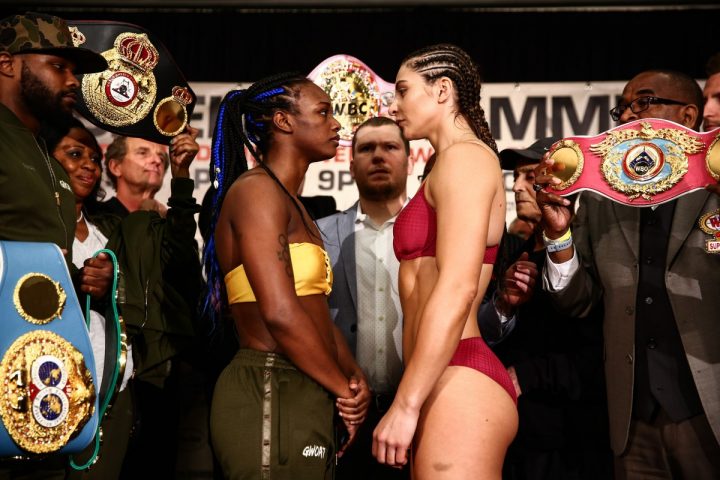 For all the belts. #ShieldsHammer TOMORROW 9:10PM ET/PT on @Showtime. pic.twitter.com/wFXIrT8iUL

Top American heavyweight prospect Jermaine Franklin will take on former No. 1-ranked U.S. amateur Rydell Booker in the 10-round co-featured bout while undefeated Swedish heavyweight Otto Wallin will battle highly decorated amateur Nick Kisner in a 10-round clash that will open the tripleheader.

Tickets for the live event, which is promoted by Salita Promotions, are priced at $150, $100, $55 and $35 and can be purchased through Ticketmaster and at boardwalkhall.com.

“I’m very relaxed. When I feel this relaxed, I know it’s going to be a good fight. I don’t even feel like there’s a fight; I feel very calm and I always fight better when I feel this way. I’ve checked all the boxes for this fight. The conditioning, the nutrition, the training, everything. I am entirely focused on the fight.

“I’ve played this fight in my head many times. The first round is a very important round. She’ll find out just how strong I am in the first round and I’m going to let her know she’s in with a fighter. I’m going to let her know she won’t control this fight in any aspect. I can outbox Hammer. I’m way faster and I have great head movement. I came to fight. I want to see where her heart is and how strong she is. If she’s not as strong as she says she is, she’s going to want to get out of there.

READ Claressa Shields, Christina Hammer, Jermaine Franklin Interview Transcript
“Every time I box, I feel like I need to go out there and perform so that women’s boxing isn’t in the position we’re in now. I want the little girls coming up not to have to go through what I’ve gone through in terms of equal pay and trying to get on TV. I was able to box my way up to get here and it shouldn’t be as hard for other women to do the same. This fight is bigger than me.”

“I’ve worked really hard for this. I’ve sacrificed everything for this fight and it’s time to show who’s the real champion and who Christina Hammer is. I feel like I’m the stronger one, mentally. I showed her at the stare down that I’m not scared. Every fight, there’s a mental battle and I think I won the mental battle for this fight.

“I have to stick to my game plan and not worry about hers. Shields is beatable. Hanna Gabriels showed that. I have to make her pay for every mistake. We’ve analyzed her a lot and I’ve known for a long time that I would one day fight her.

“I’m not scared of her one bit. Why would I be scared of her? I worked really hard for this opportunity and now it’s the point where I have to show it. I have to focus in every single round. This will be a tough fight and I know my opponent also wants to win but on Saturday night, I will be the undisputed champion of the world.

“I hope that a lot of women will be inspired by this fight. I want women to know that if they work hard, they can make it to whatever level they aspire to be in whatever sport it is they do.”