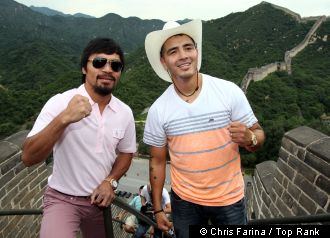 WBO TO MAKE A SPECIAL BELT FOR PACQUIAO-RIOS WINNER The World Boxing Organization will make a special belt for the winner of what promises to be an all-out action fight between “Fighter of the Decade” Manny Pacquiao and exciting Brandon “Bam Bam” Rios at the Cotai Arena in the sprawling Venetian Resort Hotel on November 24.

WBO Asia Pacific vice president Leon Panoncillo announced that Pacquiao and Rios will fight for the WBO International welterweight title and “a special belt is being made for the winner” of what both Panoncillo and WBO president Francisco “Paco” Valcarcel said one of “the most spectaculatr events in the world. It will be huge.”

Top Rank promoter Bob Arum who joined the two fighters and their trainers on a promotional tour which kicked off in Beijing on Monday and will have a press conference on Tuesday, said he expects the television coverage “to reach more people than the last Olympic Games in China (in 2008)” even as the fights being staged in Macau now emphasizes that the world is a very small place.”

Pacquiao and former world champion raced up the Great Wall of China, one of the great wonders of the world, Monday in Beijing, China.

Both fighters are making a stop in Beijing as part of their world-wide media tour which will also include stops in Shanghai, Singapore, New York and finally ending up in Los Angeles.

Arum promised that the Top Rank card on November 24 “will be outstanding because Pacquiao vs Rios is a very exciting title fight.”

Arum emphasized that Macau “is not just about gaming, it’s about bringing all sorts of entertainment and this event will do that.”