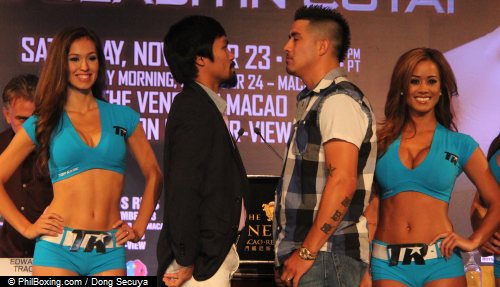 PACQUIAO VS. RIOS: ‘THE CLASH IN COTAI’ TAKES OFF IN MACAU (PHOTOS) MACAU – An army of journalists and television crews gathered inside to the Venetian Ballroom for the official launching and press conference for the highly anticipated return of boxing icon Manny Pacquiao, who will face Brandon ‘Bam Bam’ Rios of Oxnard, California in a twelve round welterweight clash on November 24. This fight is set for a Sunday morning at the Cotai Arena in Macau and will be aired to the U.S. on November 23 Saturday evening.

Pacquiao arrived here Friday with his wife Jinkee, who was recently elected as the Vice Governor of Sarangani.

“I want to thank God for another chance to fight again,” the 34 year old two-term congressman said. He also thanked Top rank, the Venetian Hotel and his better half. Pacquiao (54-5-2, 38 KO’s) hasn’t fought since December 8, 2012, when he suffered a sixth round knockout loss at the hands of his arch nemesis, Juan Manuel Marquez. “It will be a good fight,” Pacquiao continued, “Rios likes to fight toe to toe. There will be a lot of action inside the ring. I pray to God that no one will get hurt. Macau is near the Philippines, so I expect more Filipinos than Mexicans watching this fight.”

The 27 year old Rios (31-1-1, 23 KO’s), who previously won belts at lightweight and junior welterweight, relishes his role as the underdog.

Rios turned serious a few seconds later: ‘I want to show the world, all those people who said bad things about me, those who said I’m a punching bag. They will see come November.”

WBO VP for Asia-Pacific Leon Panoncillo told philboxing and said that Pacquiao-Rios will be for the WBO international welterweight title but the World Boxing Organization will have a belt specially made for this blockbuster fight. Also on hand was WBO Pres. Francisco ‘Paco’ Valcarcel who complimented Rios who he described as someone who has the heart to match against Pacquiao. Hall of fame trainer Freddie Roach said that he was happy to be working with Manny again. “I have many great fighters in my gym but Manny is number one.”

Top Rank CEO Bob Arum described the fight as a historic event. “Who would have thought forty years ago that a congressman from the Philippines would be fighting a guy from California here in Macau?” Living legend and two-time heavyweight champion George Foreman spoke on stage and described Pacquiao-Rios as a great battle between a guy who can punch really hard and someone who can take a punch very well.

The promotional tour will take the adversaries to Beijing, Shanghai and Singapore before returning to the United States for appearances in Connecticut, Los Angeles and New York.