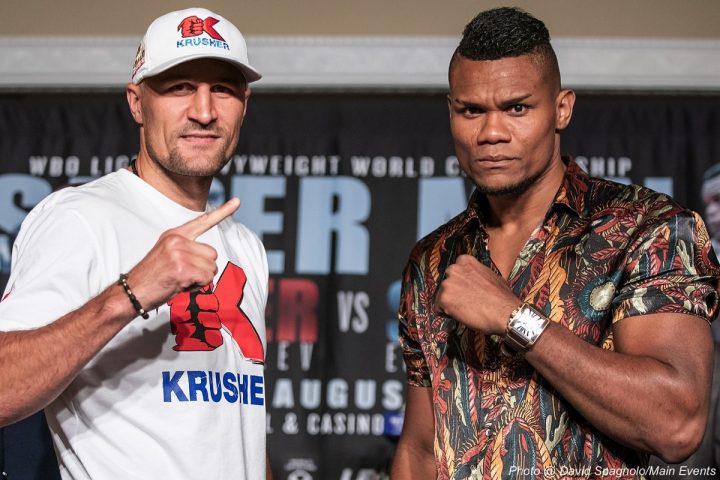 Kathy Duva, CEO of Main Events – “Oh, if these walls could talk! There are so many stories. If I got started, we’d never hear from anyone today. Main Events could not be happier to be bringing world championship boxing back to Atlantic City. We hope it’s a long, enjoyable stay.

“We are happy to have Eleider Alvarez here for just his second fight in the United States. He is undefeated with a record of 23 wins, 11 by knockout. He is coming off notable wins over legendary Canadian veterans Jean Pascal and Lucien Bute.

“When others said no to Sergey Kovalev – and I promise you, Jolene can attest to this – many others have said no to Sergey. Eleider and his team did not hesitate for one second. Bravo and how refreshing. Alvarez is ranked in the top five and a legitimate challenger. He has been waiting for two years for the shot that he earned – two eliminator fights, including one with Isaac. He is crafty and smart. And not to be under estimated.

“I’m going to ask Eleider’s promoter, Yvon Michel to come up and introduce him, and trainer, Marc Ramsay.”

“Atlantic City means a lot for people in Quebec. It’s been for long, a great vacation place. Also, we used to come here for great boxing events. My first fight here, it was when I came for a world championship with Matthew Hilton, Stefan Willette, and many more.

“And I can tell you, that fight has been easy to make with Kathy. And I’m happy, very happy, that finally we have been able to make a big event together. We have done the title eliminator between Eleider and Isaac Chilemba. But for a main event, we started the first time I met Kathy to try to make a deal, it was in 2004. It was for Leonard Dorin against Arturo Gatti. We laid down everything to make the deal, and finally I left the company Interbox then. She went ahead and made the deal with the group that followed up. So, I came here as a spectator.

“I met Kathy, and we have tried several times to make other things. But this one, it’s a good one. We’re very happy to fight The Krusher. Sergey Kovalev is a great, great champion. He proved it by coming back. And a lot of people are saying that maybe he’s not the same since the Andre Ward fight. But probably a lot people believe he won the first fight against Andre Ward. The second fight, it’s another story. But he came back and when a fighter is coming back like that, this is showing his true value.

“It’s a great, great challenge for Eleider Alvarez against Krusher. But Eleider is ready for that. Eleider Alvarez has come a long way. He has been fighting professional since 2009. It’s been nine years since he moved, he left everything in Colombia, to come to Quebec, learn French, and learn his professional boxing. He’s been world ranked five years. The first time he was world ranked, he became a mandatory contender almost two years ago. He didn’t waste his time, he was a mandatory contender and he got his best win in his career. The best wins in his career have always been against the biggest challenge. When he fought in Monaco, when he came here in Chicago, when he fought Jean Pascal – he always gave his best performance against the best opposition.

“And when, even if he hasn’t fought since the Pascal fight 14 months ago, I tell you he is the best prepared that is possible for Eleider Alvarez. He has done everything, He has a great team of trainers behind him. And I’d like to invite the greatest coach trainer in Canada, to come here and talk about his preparation. So, I’d like to have Marc Ramsay come here.”

Marc Ramsay, Trainer of Eleider Alvarez
“Thank you, Yvon, first of all I would like to thank HBO, Main Events, and Groupe Yvon Michel for coming together to give us that great opportunity. I would like to thank also Sergey, he has no obligation to give us that chance. Win or lose, he is always going for the biggest challenge possible. And as a coach, as a boxing guy, I respect that, I have a lot of respect for this.

“Eleider Alvarez had an amazing training camp. We have no injury, no excuse. He is ready to perform, ready to go, and I can guarantee you Saturday we are going for our realm.”

Eleider Alvarez, WBO Light Heavyweight Contender
“Good afternoon to all of you, First, I want to thank God for being able to actually be here. Thank you, HBO, Main Events, Kathy Duva, Groupe Yvon Michael, to the members of my team, and my manager who’s not here right now. Thank you for giving me the opportunity.

“With my trainer, I had one of the best, hardest trainings in the world. It’s made me in the best shape I’ve ever been right now. Having this opportunity to go up against a fighter with one of the greatest reputations of any contender I could think of, Sergey Kovalev, it’s an incredible opportunity. I’m very full of pride and joy to let the world know who Eleider Alvarez is. It’s time.

“I have a great training team, with Marc right here. We will be ready to go and fight. I have the talent, I am what I am. All I can do is wait to get in the ring Saturday and go for it. I give my respect to Kovalev. I want to let him know it’s a great honor. But on August 4th, I’m going to be the next world champion.

“Thank you to the journalists from Quebec for your support. I will bring home the victory.”

Kathy Duva
“You know, the last time there was a big fight in Atlantic City was just about four years ago when Sergey had one of those legendary nights with Bernard Hopkins here and walked away with three world titles. You think about it and here he is bringing it back, and when you think about it, it kind of makes sense. In my lifetime in this sport, the fighters who probably were the absolute favorites here in Atlantic City were Mike Tyson and Arturo Gatti. What those two have in common with Sergey Kovalev, other than being knockout artists, is they kind of have an attitude. Okay, and we know Sergey has an attitude, but it makes sense because this is Jersey. We all have an attitude, and I think that’s why this guy from Russia fits in so beautifully here!

“And Egis just said to me he’s got four ringsides for the highest bidder, if anybody wants it. Tickets are in very short supply.

“And so finally we move on to the man. And you have all heard that saying. right? ‘To be the man, you have to beat the man.’ Well, Sergey is the man in this very competitive division. And you don’t have to just take it from me; just ask any of the light heavyweights whenever they win a fight and gets asked, “who do you want next?’ They say Sergey Kovalev — you know, until Jolene calls them up and offers them a fight.

“But he is hungry, and he is looking forward. He has one goal left before he retires, and that is all of the belts. So, let’s hope all of the other champions cooperate this time. And if they do, we are in for one hell of a good time.

Sergey is here along with his manager and my dear friend Egis Klimas, who I call Manager of the Year for life. Because I really think they’re going to have to retire that award for you soon. Sergey and Egis, we at Main Events were just meant to meet them the day we did, and it has been glorious ever since. We’ve had our ups and we’ve certainly had our downs, and it has been one of my greatest experiences of my life to work with them and it continues to be. And I’m going to bring Egis up here to please give us our thoughts about Saturday’s bout.

“Hello everybody and welcome to Atlantic City, with a venue nobody thought we would be seeing, this Hard Rock. So, thank you for the hospitality.

“Great news! First of all, I have the best seat in the house between two champions. Second, Kathy just mentioned they have four ringside tickets, which I can sell for $800. she didn’t mention the price… going once, going twice No? Okay, we’ll deal later.

“What can I tell, what can I tell, that’s going to be a big test for Sergey Saturday night. Because he is going to be facing, as Yvon Michel said, one of the best. They are champions, but when we talk they are not champions – but one of the best light heavyweights today in boxing. I have no doubt. I believe in Sergey, I saw his preparation, and I saw the way he prepared for this fight. And I’m not going to talk much; Sergey is going to show us Saturday night in the ring. And I just want to say: Krusher is back. Thank you.”

“And again, it is my profound pleasure to be able to introduce to you the light heavyweight champion of the world, Sergey Kovalev. The Krusher.”

“Hi everyone. What can I say, but I am really glad to be here at one of the famous places of boxing, Atlantic City. I am very happy to be fighting here.

I want to first of all say, thank you very much to my team, my newest promotions of Krusher Promotions, HBO and Hard Rock Hotel for organizing this fight, this event and to all of my boxing friends who follow me. It is very important to me, because it gives me motivation moving forward. And all that I do right now and continue to do after my two crazy losses.”

Right now, with my coach working with me for the fight, Abror Tursunpulatov, I feel much more professional, because we’ve delivered and went through mistakes. I hope this Saturday, I will show my best skills and what I came to do.

Thank you to the team of Eleider Alvarez to take this fight, because this fight is going to be really interesting. And I’m really proud because he is an undefeated guy and he is professional and fights strong. I just want to say, watch HBO this Saturday, and come to Hard Rock Hotel and watch a nice evening of boxing. Thank you very much, and thanks to God for everything.”

About Kovalev-Alvarez: In the first boxing event at the newly opened Hard Rock Hotel & Casino in Atlantic City, NJ, Sergey “Krusher” Kovalev will defend his WBO Light Heavyweight World Title against undefeated contender Eleider “Storm” Alvarez on Saturday, August 4, 2018. In the co-main event, WBA Light Heavyweight World Champion Dmitry Bivol will defend his title against Isaac “Golden Boy’ Chilemba. Tickets range between $50 and $200 and are on sale now through HardRockHotelAtlanticCity.com and Ticketmaster.com. The event is promoted by Main Events and Krusher Promotions in association with Groupe Yvon Michel and World of Boxing and will be televised live on HBO World Championship Boxing beginning at 10:00 p.m. ET/PT.