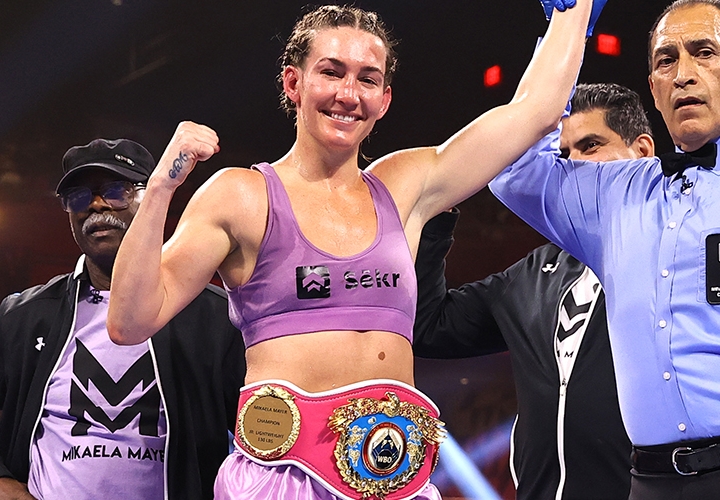 Mikaela Mayer grew up in Southern California and then left to pursue a boxing career. After an Olympic berth, nearly five years as an unbeaten pro and a pair of world titles, Mayer finally authored her triumphant championship homecoming.

It was the third title defense for Mayer (17-0, 5 KOs), and her first as a unified world champion. She did everything but force the stoppage, outlanding Han by a more than 3-1 clip (192-63). Early in the fight, Mayer busted open Han’s nose with a right hand and used a stiff jab to keep Han on the defensive.

Han (18-5-1, 1 KO) landed the occasional counter against the ropes, but Mayer was never threatened. It’s onwards and upwards for the woman ranked No. 5 on ESPN.com’s pound-for-pound rankings.

Mayer said, “I feel like I did a lot of good things in there. Her movement, I think, is what she does best and it throws you off. She gets her spacing in a little bit, so I had to throw her off and stay behind the jab. Coach Al {Mitchell} reminded me to stay behind the jab, set the right hand up. She would duck sometimes and make me miss. I started to go to the body. All in all, she’s a tough, durable girl. That’s why we chose her for this fight. We knew she would push me, but I feel like I did well.

“I wanted to get the stoppage I feel like I hurt her in the eighth round, almost finished her. This is another reason why I’m advocating for three-minute rounds.

“I’ve been pretty clear that I want to go undisputed at 130. {Alycia} Baumgardner and {Hyun Mi} Choi, I’ve been calling them out. I want {either} fight, but if they’re not going to give me that fight in a timely fashion, I’m game to go up and challenge the winner of {Amanda} Serrano versus Katie Taylor.”