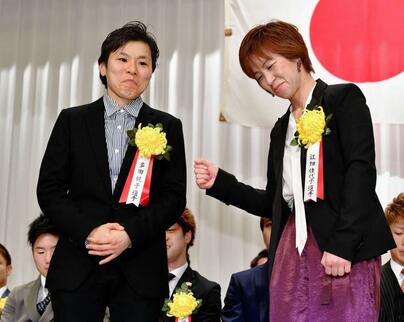 Earlier today the Japanese Boxing Awards honoured a number of fighters and fights. One of the Fights that was honoured was the WBO female Mini-Flyweight title bout between Kayoko Ebata (12-8, 6) [江畑佳代子] and Etsuko Tada(18-3-2, 5) [多田悦子].

The bout, which was held on December 1st and shown on demand on ‘Boxingraise’, won the Best female Fight award, and saw the two women take the stage together.

At the even Tada revealed a rather embarrassing fact. She had failed to bring the WBO title with her to the event, having left it on the train on her way to the award ceremony. The revelation caused an uproar of laughter at the Tokyo Dome Hotel.

This could have ended up a very costly mistake, given the price of the belts, but whilst at the awards she was informed it had been safely recovered by the rail staff.

Despite losing the WBO title, albeit only momentarily, Tada does have eyes on more silverware and again revealed she is hunting a WBC title as she wants to win all 4 titles during her career, having previously held the IBF and WBA belts.