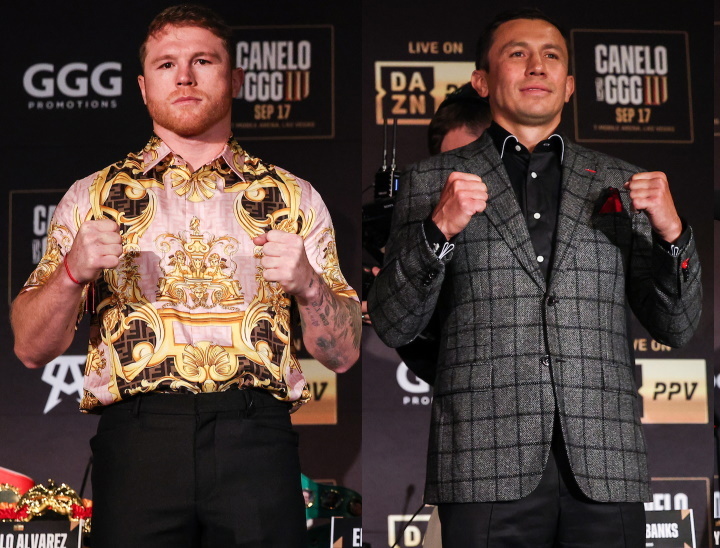 Until Friday, Canelo Alvarez and Gennadiy Golovkin hadn’t seen each other since their September 2018 rematch which the former won a majority decision to hand the latter his first defeat.

The bitter rivals didn’t greet each other with hugs, kisses, or fist bumps as they had a face-to-face for the ages. They had nearly a two-minute exchange with Alvarez staring a hole through Golovkin, who kept smiling at him.

Before their undisputed super middleweight championship on Saturday, Sept. 17, live on DAZN PPV in the U.S. and Canada and around the world on DAZN (excluding Mexico, Latin America, and Kazakhstan), Canelo and GGG had the second and last press conference on their media tour on Monday. Alvarez and Golovkin began the festivities as they did three days ago with a highly intense face-to-face. However, this time around, Golovkin wasn’t all smiles.

The first two fights have gone the full 12 rounds. However, on Sept. 17, Golovkin (42-1-1, 37 KOs) promises that won’t be the case and feels he has to win the fight inside the distance.

“Absolutely (needing to win inside the distance),” Golovkin said. “I feel very comfortable. He said he wants to destroy me.

“Right now, this is the best fight in boxing. History fight.”

Alvarez (57-2-2, 39 KOs) was a little bolder in his prediction and wants to leave no doubts in a little less than three months time.

“My goal for this fight is to end inside the distance. I’m strong, more mature, and in my prime right now.”

Here is what happened at the second Canelo Alvarez vs. Gennadiy Golovkin 3 media press conference.
ONE FINAL STAREDOWN