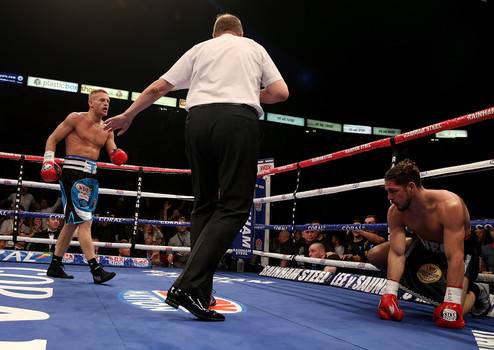 On Saturday night, the reigning, defending WBO lightweight champion of the world, 26 year-old, 5’9½” tall, southpaw Terry “Turbo” Flanagan (28-0, 11 KOs) of Manchester, England was making his first title defense and it just happened to be in front of the home folk at the Manchester Arena in a scheduled 12 rounder against a gentleman the promoters were touting as “the #1 ranked contender” 28 year-old, 5’6” tall Diego Magdaleno (28-1, 12 KOs) from Las Vegas, Nevada. Even though several ranking systems had Magdaleno ranked as high as #27 in the world, the WBO had him ranked right up in their Top 10 plus several of the local British bookies had the betting line for this fight a toss-up.

After just 5 minutes and 38 seconds, the fight was over. The end came in round two when Flanagan dropped Magdaleno three times. After several extremely hard left uppercuts, a plethora of extremely hard left hooks, the repeated head snapping jabs, referee Terry O’Connor finally stopped the fight at the 2:38 mark of round two. Even though Magdaleno finished on his feet, there was no way he could have possibly continued after the three straight knockdowns. With his extremely wide stance for a short man, he looked like an first time ice skater falling all over the ice. With the legs separated he did two ballerina splits. To his credit, the fully exposed Magdaleno showed a lot of heart and kept throwing his own hard shots albeit missing by a wide stretch.