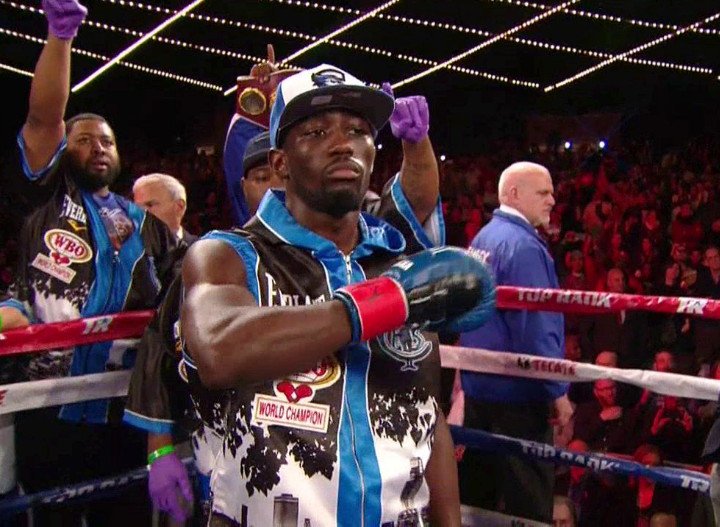 Terence Crawford vs. Viktor Postol – The battle for stardom By Chris Williams:   Top Rank will be sending their light welterweight champions Terence Crawford (28-0, 20 KOs) and Viktor Postol (28-0, 12 KOs) into the ring next month in their first headlining fight on HBO pay-per-view at the MGM Grand in Las Vegas, Nevada. Crawford will be defending his WBO title and Postol have his WBC belt on the line for the fight.

You can argue that neither of these fighters is even remotedly popular enough to be headlining a PPV event on HBO. However, there were not available dates on regular HBO for them to fight this year, so Top Rank promoter Bob Arum chose to put the fight on PPV.

Crawford, 28, is hoping to become the next superstar in the sport. The bad news is that Crawford probably won’t able to become a super star in the Floyd Mayweather Jr. or Manny Pacquiao sense if he’s stuck fighting at 140 against the guys he’s been facing in the last two years.

I think it’s going to be very hard for Crawford to become a superstar fighting the likes of Hank Lundy, Dierry Jean and Thomas Dulorme. I think Crawford can become the next Ruslan Provodnikov or Lamont Peterson type star, but not a superstar if he’s limited to fighting lesser fringe level opposition.

“This is just the beginning. It’s my first pay-per-view and I want to put on a great performance. I want to be the next superstar,” Crawford said to fightnews.com.

I wish I could agree with Crawford that the Postol fight was the beginning of him becoming the next superstar. I don’t see that being the reality for Crawford. For him to become the next star in boxing along the lines of Mayweather or even Gennady Golovkin, I think he would need to fight ALL of these fighters and beat them all:

The basic problem Crawford has is he’s probably not going to ever fight any of those guys. I honestly cannot see Crawford ever fighting any of the above mentioned names from my list, and that’s too bad because if Crawford could sweep through that entire list, he would be a star, a huge star. It’s one those things where Crawford would need to beat 17 top fighters before his career finishes up before he can become a star. I do not see Crawford’s promoter Bob Arum being able to negotiate fights with the promoters for those fighters.

Golovkin probably would never agree to fight Crawford in the first place because it would be a stiaution where he would get no credit for beating up in a 140lb fighter that looks as thin as Crawford. But for the sake of argument if a fight did take place between Golovkin and Crawford, I think it would be a pure wipeout with Golovkin destroying Crawford. The same if Crawford got put in with the Charlo brothers. Crawford doesn’t have the blinding hand speed and defensive skills of someone like Mayweather to beat guys in divisions above his natural weight class at 140. So if you throw Crawford in with the Charlo brothers, Canelo or even someone like Lemieux, I think it would end badly for Crawford.

In getting back to my point about Crawford wanting to become the next superstar in the sport, I do not think he’s going to get the chance to make that happen in the present climate in the sport. If all the promoters were willing to work with one another, then maybe Crawford could become a superstar, but only if he beat all the guys on my list.

Do I really think a slender fighter like Crawford can beat the likes Thurman, Canelo, Golovkin, Errol Spence, the Charlo brothers, Lara and Lemiuex? No, I don’t think so. I think Crawford would be beaten by most if not all of them. I think Crawford is a very good fighter at light welterweight, but asking him to beat bigger fighters with a more solid build and superior punching power would be too much to ask. I think Crawford would get destroyed by all of them. We kind of got a hint at Crawford’s limitations in his fights against Yuriorkis Gamboa and Thomas Dulorme. Both fighters were working Crawford over pretty well and even had him hurt. The question you have to ask is how can Crawford become a superstar if he can’t even dominate the likes of Dulorme and Gamboa?