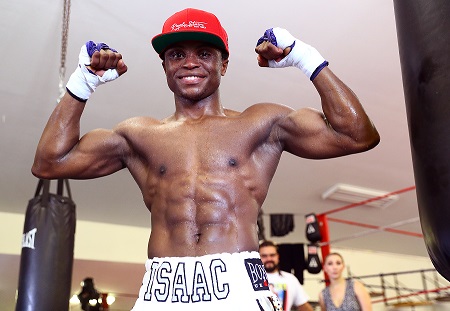 WBO super bantamweight titlist, Isaac “Royal Storm” Dogboe, and his team have pitched camp in Las Vegas as they continue with preparations ahead of the boxer’s upcoming defence against Mexico’s Emanuel Navarette on December 8.

Dogboe, who will be slugging it out with Navarette at the Madison Square Gardens in New York, will continue his fight build up at the Top Rank Gym in Las Vegas before moving to New York for the fight.

According to the father and trainer of the Ghanaian boxer, Paul Dogboe, he would be taking his son through their final drills this week at the Top Rank Gym, and then undergo mandatory medical tests before the big fight on December 8.

Confirming the team’s preparation from their Las Vegas base, Paul said everything was in place to ensure they came out victorious.

“We are currently in Las Vegas to continue with our preparations at the Top Rank Gym before moving to New York for the fight.

“Everything is moving on as planned and we are hopeful of a convincing win at the end of the fight,” he told the Graphic Sports.

The undefeated Dogboe (20-0, 14 KOs) is expected to end the year with an unblemished record, having defeated all three opponents — Cesar Juarez, Jessie Magdaleno and Hidenori Otake — via knockout victories.

In January Dogboe defeated Juarez in Accra to claim the WBO Interim super bantamweight title before defeating the previously undefeated Magdaleno in Pennsylvania in April via an 11th round TKO to win the WBO title, which he defended successfully in August with a first-round stoppage of Japanese boxer, Otake.

Meanwhile, the 24-year-old Dogboe is looking forward to a possible unification bout against WBA champion, Daniel Roman, after his fight with Navarette and has called on his manager, Eddie Hearn, to reach an agreement with Bob Arum of Top Rank Promotions for a showdown in early 2019.

Dogboe has been calling out Roman and WBC title holder, Rey Vargas, for a possible unification fight with the Ghanaian accusing the boxers of avoiding him.

Speaking after his emphatic victory over Otake in August, Dogboe said, “Now, I want to face all the champs. Let’s do this. I’m ready to unify all the titles. I thank Hidenori Otake for signing the contract to make this fight because all these champions out there, my team called them, we spoke with them but they failed to sign the contract.

“But there is a new kid on the block, Isaac ‘Royal Storm’ Dogboe, the warrior of Africa, the 122 division so all you champs out there in my division, come let’s put it on, Rey Vargas, Daniel Roman, wherever you are, come out, let’s do this,” Dogboe said.