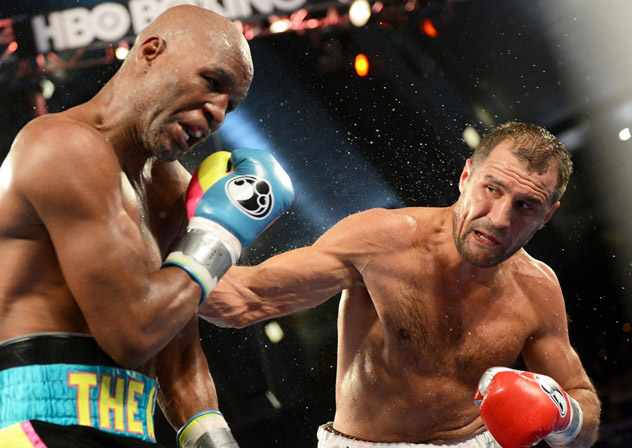 ATLANTIC CITY, N.J. – Following 11 rounds of utter domination, the only thing left for Sergey Kovalev to accomplish early Sunday morning was to become the first opponent in Bernard Hopkins’ 26-year career to knock him out.

If Kovalev had 10 more seconds at his disposal in Round 12 of their light heavyweight title unification fight at Boardwalk Hall, he might’ve accomplished that feat, too.

The Russian knockout artist instead settled for handing Hopkins the most lopsided loss of his Hall-of-Fame career, a 12-round unanimous-decision defeat so thorough the 49-year-old Hopkins acknowledged afterward that it’s “50-50” whether he’ll fight again. Regardless, as Hopkins’ legendary career nears its conclusion, the most impressive victory of Kovalev’s five-year pro career should thrust him toward stardom.

“He did just what I knew what he would do,” said John David Jackson, Kovalev’s trainer. “Tonight he was the teacher.”

Kovalev (26-0-1, 23 knockouts), who hadn’t boxed beyond eight rounds in any of his first 26 professional fights, easily demonstrated that he was prepared to win championship rounds against the most accomplished, experienced opponent he has faced. All three judges – New Jersey’s Lawrence Layton (120-106), New York’s Carlos Ortiz (120-107) and Rhode Island’s Clark Sammartino (120-107) – credited Kovalev with winning each of the 12 rounds.

Kovalev took Hopkins’ IBF and WBA light heavyweight titles and retained his WBO 175-pound championship. He also won the respect and admiration of boxing experts who wondered whether his record was more the byproduct of his opposition than Kovalev’s skills and power.

“I don’t care how old he is,” Oscar De La Hoya, Hopkins’ promotional partner, said. “To beat somebody like Hopkins, Kovalev did a tremendous job. He executed his game plan perfectly, and that’s not easy to do against a legend like Bernard Hopkins.”

Kovalev, 31, dropped Hopkins with a right hand to the side of his head with a little less than a minute to go in the first round. Hopkins reached his feet quickly and made it to the end of the round, but mostly employed a cautious approach for the rest of the fight. Hopkins opened up in Round 12, but his aggression only encouraged Kovalev to unload an array of power punches that hurt him, left him stumbling all around the ring and pushed the Philadelphia native dangerously close to getting knocked out.

Hopkins (55-7-2, 32 KOs, 2 NCs) took 166 of Kovalev’s 585 overall punches, according to unofficial CompuBox statistics. Kovalev landed 38 punches in Round 12 alone, the most connected on Hopkins in any single round of the 41 Hopkins fights CompuBox has worked.

“He had a really good game plan,” Hopkins said. “When he got hit with some of my shots, he would step back. But he used his reach and distance and that was the key to his victory tonight. He has very good mechanics and patience. Because after I hit him, he would step back. That would cause me to have to reset. He had a good game plan, I’ll give him that. He’s a good technical fighter. He would counter his right hand over my jab. I give him a lot of respect.”