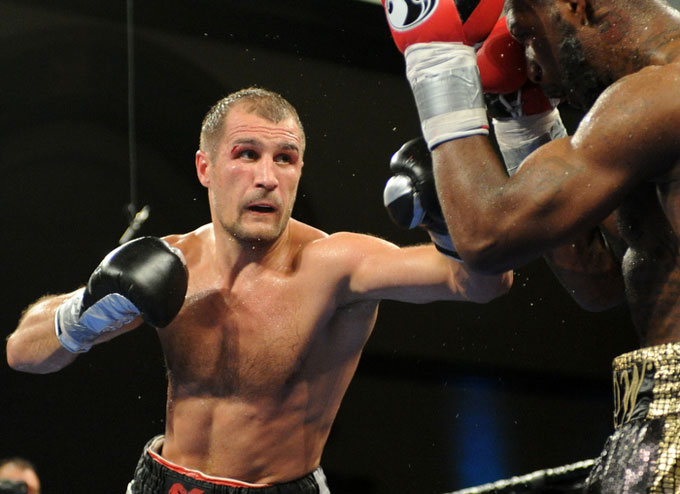 Sergey Kovalev’s fight with Cedric Agnew was originally intended to be a keep-busy bout, showcasing him ahead of a proposed showdown with light heavyweight champion Adonis Stevenson.

Kovalev might not get the Stevenson bout, but the 175-pound titleholder got his showcase victory, putting Agnew down three times en route to a seventh-round knockout.

It was only the third time in Kovalev’s career that he had been extended past six rounds. And that was in large part because Agnew focused on defense, keeping a high guard to try to block as many of Kovalev’s punches as possible and using movement to attempt to stay away from the rest. Agnew did jump forward on occasion with a few punches in combination, which Kovalev took well.

Kovalev adjusted to Agnew’s high guard by taking the steam off of some of his shots,  jabbing between the guard, looping hooks around it, and dedicating more of his attack to Agnew’s body — an investment that would pay off later.

Toward the end of the second round, Kovalev threw a four-punch combination that concluded with a right hand and a left hook that put Agnew on the canvas. The bell rang and Agnew rose, getting an extra minute to recover.

Agnew was able to draw blood from Kovalev in the fourth round, when Kovalev threw a right hand and missed with a left hook, and the ducking Agnew rose up. Their heads clashed, bringing crimson from above Kovalev’s right eye. The referee, Samuel Viruet, wrongly ruled that the cut had been caused by a punch.

Through four, CompuBox had Kovalev landing 60 shots, half of which were to Agnew’s body. Agnew had been credited with landing just 20 at that point.

Kovalev’s cut man went to work, and the fighter didn’t bleed at all in the fifth.

The domination continued in the sixth. It started with a jab to the body, a right hand up and then a left to the head, and Agnew appeared to sit on the ropes. Kovalev was credited with landing 29 punches in that round to Agnew’s six, though another cut opened a bit below Kovalev’s left eye, which he blamed on Agnew’s shoulder.

Agnew had little left. In the opening minute of the seventh round, Kovalev landed a left to Agnew’s body, and Agnew went down to a knee and remained there while the referee counted him out.

The end came 58 seconds into the round. All three judges had Kovalev shutting Agnew out, 60-52, at that point.

But that was to be expected. Kovalev was expected to win against a skilled but largely unknown opponent. His team and HBO had been working to make a deal for Kovalev to face Stevenson — who faces Andrzej Fonfara in May — this coming September. They believed a deal had been made, but Stevenson signed with Al Haymon in February, and Stevenson’s team recently accepted more money for the Fonfara bout to land on Showtime instead.

Kovalev now has a multi-fight deal with HBO. It remains to be seen who his next opponent will be, given that the other two top light heavyweights, Bernard Hopkins and Beibut Shumenov (who fight each other in April), work with Golden Boy Promotions and are featured on Showtime. Many believe that Stevenson will face the winner of Hopkins-Shumenov.

Kovalev won the World Boxing Organization’s world title last August with a fourth-round stoppage of Nathan Cleverly, then defended the belt in November with a second-round knockout of Ismayl Sillakh. He has scored knockouts or technical knockouts in all but two of his victories, yet that record hasn’t been built against the highest level of competition. A Stevenson would have fixed that.